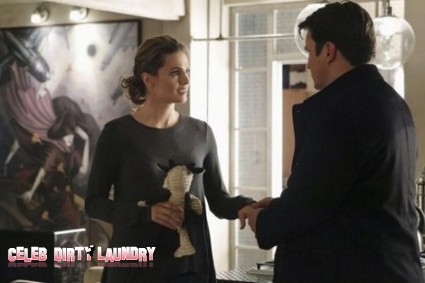 Tonight my favorite show Castle returns with a whole new episode called ‘An Embarrassment of Bitches’ on ABC.  Stay tuned as we live blog the show with up-to-the-minute details.  If you are a fan like I am you know that episode 13 is always about Beckett’s mother’s murder, but not this time. I wonder why they have broken with tradition?

On tonight’s show ewen a famous dog trainer is killed, the investigation keeps coming back to charismatic reality TV star Kay Cappuccio (guest star Hilarie Burton, “White Collar”). Kay, a favorite of tabloids and gossip websites the world over, has achieved stardom without possessing any discernible skill or talent. But there seems to be more to her story than she is letting on — does that include murder? — on “Castle,” MONDAY, JANUARY 23 (10:01-11:00 p.m., ET), on the ABC Television Network. Justin Hartley (“Smallville”) guest stars as Reggie Starr, Kay’s boyfriend, and Nana Visitor (“Star Trek: Deep Space Nine”) plays Dr. Patty Barker, an eminent therapist whose talents are called upon when it’s discovered that one of her clients witnessed the murder.

We posted three sneak peek videos today, so if you want to get a look before the show starts head over here!  Let us know in the comments below how you are enjoying the show this season.  We will be live blogging the show tonight with all the up-to-the-minute details.  So make sure to come back to this spot at 10PM and enjoy the show with use!

RECAP: The show begins at a dog show, where a world renown trainer is about to pick the ‘best in show’.  Meanwhile, TV reporters are interviewing reality TV star, Kay Casppuccio with her boyfriend Reggie Star.

At home, Alexis wants to go out with a friend and after she sees Castle’s reaction she jokes that she is planning on taking his Ferrari and hooking up with guys from Craigslist. Seriously, her friend’s name is Buttons Dutton (really!) and just when she tells Castle, the phone rings and he’s gone.

Francisco Pilar, the judge from the dog show, is the new murder victim and he is found dead with a leash around his neck.

Rick and Kate talk to Mr. Green about the victim, his only family was his dog, Royal. The victim was a dog whisperer. Rick and Kate ask for a list of all of the contestants from the dog show. Royal is outside of the room scratching on the floor. The victim was murdered in front of Royal, so maybe, just maybe there’s DNA on him.

Rick and Kate find out that some of the dog owners think Francisco was on the take because of his choice for Best In Show.

Javier mentions that a witness noticed a woman leaving Francisco’s room. Kay Capuccio was the person leaving the victim’s room, but Rick doesn’t understand why Kay would kill him? Kate is really puzzled how Kate has so much going for her, but no discernible talent.

Rick and Kate go visit Kay and she tells them that she hired Francisco to train her dog because it had behaviour problems, but he brought her dog back and told her that he didn’t want to work with her. It turns out that Kay was the one that found the victim’s body, but only called 911 when she got into the limo.

Rick and Kate talk to Dr. Barker, Royal’s therapist, about the his eating habits. She said tells them that Francisco cancelled his last appointment for Royal and she offers to see Royal and find out if there’s something that he is trying to communicate about the murder since he was with the victim when he was married.

Dr. Barker is talking to Royal about all of the scratching he was doing when they found him at the scene of the crime.

Francisco was worried that he was being bugged, so Javier checks his GPS and gets a lead, he heads out with Kate.  The GPS leads them to a  building, they get in with the victim’s access card. The place is guarded by vicious German Shepherds who charge at Javier and Kate, they make a RUN for it!

They bump into a guy in the building named Jack Patterson, who asks what they’re doing there. He tells them that Francisco was breeding a new type of designer dog. Jack knows about the $10,000 payments and Francisco showed up yesterday with a bug detector to do a sweep of the place.

Kevin finds the bug sweeper and it has a memory card. Kate is suspicious that Kay knows more than she is telling them. Back at the precinct, Kay is with her little dog who is whining a little and the bug sweeper goes off. Kate confronts Kay about what really happened with Francisco, when Kevin interrupts that Kay set off the sweeper. Kay has a hidden bug in her dog’s collar, she was the real target!

Kay is really upset that someone has been watching her because whoever installed that camera, did it within the past two weeks. Kate wants a list of whoever had access to Kay’s dog. Kay goes on to mention that TMZ offered a million dollars for the first naked photo of her.

Javier has the hots for Kay. Rick and Kate go see the dog and they both offer to take him home. She wins rock/paper/scissors to take the dog home. They decide to share the dog.

Kate takes Royal in for the night and Rick takes her hand, rubs it in circles and tells her Royal likes that. The two get lost in the moment, but only a moment.

Javier goes through some paparazzi photos with Kay who says that her life is depressing and she’s always shopping. Kay spots the picture on Celebrity Report from the collar cam. Now, they have to find a photographer that works for Celebrity Report, he also had credentials for the dog show.

The photographer’s name is Marcus and they question him on how he got access to the dog. Behind the mirror, Rick is with Royal and telling him that the Marcus is bad. Marcus says that he stumbled upon the feed, but he didn’t know where it was coming from. He goes on to say that Francisco was talking about “street values” and shipments from Argentina. The dog trainer was a actually a drug courier!

Rick and Kate are talking to Jack again about the warehouse. Jack starts talking weird, he tells that they are going to find heroin and bottomless suitcases that the drugs could be smuggled in. You guessed it, he’s actually a cop and reveals that Francisco was training drug sniffing dogs and the Vazquez cartel would have benefited from Francisco’s death.

Rick and Kate are standing around and Royal starts scratching at Kate’s feet, she is wearing some of Kate’s perfume……

They find out that Kay stayed at Junior Vazquez’s compound, so this makes her the common denominator. They pull her in for questioning and reveal that the murderer was wearing her perfume. She’s so dumb, she says that it is impossible because she’s the only one that has the perfume.

It turns out that Kay is not the connection, it is her boyfriend. He tries to make a run for it but Rick turns Royal loose on him. later, he confessed to the whole thing. Apparently, Reggie wanted to score some points with the cartel knowing that his time with Kay was limited, despite the tabloid rumors.

Rick and Kate try to decide where Royal should live, they put him between them to choose where he wants to go but he doesn’t go to either of them, he chooses Kay instead.

Alexis comes back from her weekend trip away and Castle reveals that he wants to get her a dog, she suspects it’s only because he wants her to visit often when she leaves for college.