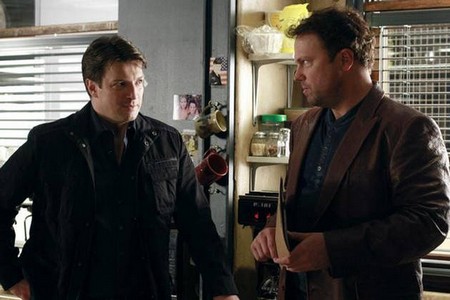 Tonight on ABC a whole new episode of Castle airs.  The episode is called ’Headhunters’ and we will be live blogging the episode with all the up-to-the-minute details.

On the last show 2 weeks ago a devilishly handsome detective from Scotland Yard, Simon Hunt, teams up with Castle & Beckett to find the person responsible for the murder of his friend’s daughter.  If you missed the episode you can read our full and detailed recap here.

On tonight’s show With tensions rising between Castle and Beckett, Castle finds himself a new partner — Detective Ethan Slaughter (guest star Adam Baldwin, Firefly), a tough and colorful cop from the city’s gang unit. But Castle gets more than he bargained for when Slaughter shows him a grittier side of police work that puts Castle in the line of fire like never before.

On tonight’s show Castle learns to appreciate Kate now that she is gone.  With partner Slaughter, Castle comes to see the difference between someone having your back and someone throwing you to the lions.  But not to worry even though Slaughter does not care about Castle, Kate and the rest of his friends back at the 12th do!

We will be live blogging the show with all the up-to-the-minute details at 10PM EST so make sure to come back to this spot and watch the show with us. Make sure to refresh often to get the most current update!  While you wait for the recap, check out a sneak peek of tonight’s episode below!

Tonight’s Episode: A homeless guy finds a dead body and some severed heads. Meanwhile, Castle is playing with dolls and his mother catches him, he claims he is working. Alexis received a lot of letters for a college acceptance and Castle goes to open them but his mother stops him. Castle is watching tv when the news channel reports that they have found severed heads, the cop that arrives at the scene is Slaughter.

Castle goes to the station and sees Becket, he asks her about the ‘Slaughter guy’ case, she tells him that he needs to go to the morgue if he wants to meet Slaughter who is on the case.

Castle gives up his coat to Slaughter in hopes of his allowing him to be on the case, but it doesn`t work. Castle is shocked, then he throws out that he is friends with the mayor and the Slaughter says ok, he can ride with him.

They go to see the father of one of the victims who doesn’t say much but Slauighter thinks he is going to go after the killer himself.

Castle has some names that he wants Esposito to run through but Esposito won’t do it for nothing (he wants basketball tickets) and he goes on to tell Castle that Slaughter has already been through three partners that were killed in the line of duty.

Slaughter and Castle arrive at a bar, where the victims father is going in. Slaughter asks Castle if he is packing and when he says no, he gives Castle a gun. The two head into the bar, Castle gets into a fight, while Slaughter eats peanuts and watches.

Castle and Slaughter walk into the station with two arrests, Becket is shocked. Castle tells her that he had to take one of the guys asses down. Becket tells him that it is not his place to be doing this, she reminds him that he is a writer.

Slaughter and Castle are interrogating one of the guys, but he claims that he didn’t kill Glitch and hadn’t seen him in two days but knows he was trying to make things right, so Castle thinks that is why he severed the heads.

Becket is beside herself, she thinks that Castle has moved on and maybe doesn’t want her anymore.

Slaughter tells Castle there is a new girl with red hair at the morgue who has a great ass, it turns out it is Castle’s daughter, he lays a punch right across Slaughter’s jaw. Slaughter and Castle pull up to a building, Slaughter sees ‘his guy’ and goes in and Castle hears a few gun shots, then Slaughter walks out and tells him he has a name.

Castle is back at the station, he tells Esposito that Slaughter is insane and Esposito reminds him that he still wants his tickets. Right at this moment, Slaughter arrives at the station with the guy who Castle thought he shot, Mark Gibson who is an undercover cop.

Slaughter surprises Castle, they are going out to celebrate Castle`s first day on the job with him. The next morning, Castle is passed out on the couch and his daughter starts screaming, she was accepted to many colleges, even Stanford.

Castle is back on the case with Slaughter, he feels like crap. They start talking and they think that the Mexicans are making the Jamaicans and the Westies both take out each other.

Esposito is at the station and he discovers that Castle and Slaughter are trying to take out a Mexican that is extremely dangerous and he is worried that they are both going to get themselves killed.

Castle and Slaughter are at a scrap yard where there are a bunch of tough guys that start following behind them. Slaughter announces that they are from the NYPD and start talking to a Mexican guy, he asks him if he knows a guy named Glitch but the Mexican tells him no. Slaughter goes on to say they no all about their plan when Esposito and a bunch of cops arrive just in time to save them.

Back at the station, Castle barely has a moment to sit down when Slaughter calls him downstairs. They get into the car and after a few moments someone starts banging on the trunk, there is someone inside. Slaughter starts making some doughnuts, spinning and spinning the car around while whoever is in the trunk is screaming. Slaughter stops the car and goes to open the trunk, it`s a Mexican kid inside, he was the youngest person at the scrap yard and Slaughter is convinced he can get info through him. The kid finally gives it up, the Mexicans did it, Vallas killed Glitch.

Slaughter takes the kid back to the station, the plan was to kill Glitch and make it look like the Jamaicans did it. Slaughter assured that boy that if he continues to talk, his brother who is incarcerated already for something else, will get a lighter sentence. Castle listens in, he confronts Slaughter because he feels that he coached that kid to say things that really were not true and tells Slaughter that he is out, wants nothing to do with it.

Castle goes to see Becket, tells her that he pressured a kid to make a confession that is false. Becket tells him that she can`t do anything because she is not on the case. Becket shows him a shot of a traffic cam, Vallas left the area just before Glitch was killed, he couldn`t have done it. Becket and Castle head to the crime scene and Slaughter is not far behind them. Becket tells Slaughter that he coerced a kid to make a confession. Slaughter just wants Vallas arrested no matter if he did because he is a bad guy.

Castle and Becket stay at the crime scene and try to figure out who murdered Glitch. They head back to the station and tell Slaughter that Vallas did not kill Glitch and the real killer is still on the loose. They bring in Glitch`s father, it turns out he was the one that killed his own son.
Becket sees Vallas and goes to speak to him, she tells him that NYPD is going to be hot on his trail so he is better off leaving the city. Slaughter and Castle watch Becket have the exchange with Vallas and both think she is really sexy. All of a sudden, Slaughter punches Castle in the stomach and tells him that is for not having his back.

Back at home, Alexis can`t decide which college she wants to attend so she and Castle decide to have some ice cream to help her make a decision.