‘Castle’ Returns to ABC for its Sexy Season 5: Check out the New Cast Photos! 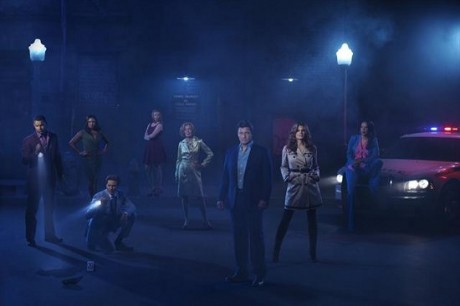 ABC‘s intense detective/mystery series Castle will be returning for its fifth season, and we are eager to see what kind of sticky — and romantic — situations NYPD Detective Kate Beckett (Stana Katic) and novelist-turned-crime-fighting-sleuth Richard Castle (Nathan Fillion) find themselves in. After nearly four seasons of romantic-sexy tension between the two characters, they finally gave into their desires in the season 4 finale.

Castle and Beckett have one of those wonderful relationships that is filled with tension and, just like the cases they solve together, mystery. At first, when Richard Castle first met Beckett, they instantly clashed. Beckett, a by-the-book cop with years of detective work beneath her belt, is often time challenged by the free-thinking, creative mind of Richard Castle, who isn’t afraid to think outside the box — and think like a murderer.

I find that this quirky duo is one of the best set of characters on TV right now, and it will be interesting to see where their relationship heads. We hope it doesn’t head down the drain, but we’d all be delusional to think that this relationship won’t come across at least a few bouts of heavy NYC traffic. Let’s just hope it doesn’t come to a complete stand still.

Do you think their relationship will finally take off? If so, how will it alter their professional working relationship? The season 5 premiere of Castle will continue from where the previous season ended: the morning after Beckett and Castle decided to explore their feelings — on an entirely different level — with each other. Don’t forget to tune in for the season premiere. Castle season 5 premieres Monday, September 24 at 10PM ET/PT on ABC. While you wait, check out the awesome set of cast photos we have for you. Don’t forget to check out CDL’s TV section and if you want to check out all the awesome, NEW fall shows coming this season watch our fall 2012 TV preview vid below the gallery!

New TV Shows Coming our Way for the Fall 2012 Season: A Preview