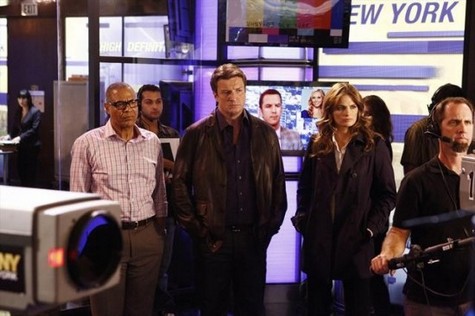 Tonight Castle returns to ABC with a whole new episode called “Cloudy With A Chance of Murder.”  On tonight’s show Beckett returns to the precinct after her suspension.  Did you see last week’s premiere episode?  We did and we have a full and detailed recap here for you.

Castle and Beckett finally gave into their feelings towards each other in the much anticipated season 4 finale.  On last week’s show, Season 5 picked up on the proverbial morning after, with Castle and Beckett facing new questions — Was this a one-time fling, or were they now a couple? But before they found the answers, they had to take on the forces responsible for Beckett’s mother’s murder that  threatened Kate Beckett’s life.

On tonight’s show “Cloudy with a Chance of Murder” – On Beckett’s first day back from her suspension, she and Castle are thrown into the salacious world of local TV news when WHNY’s veteran weather girl is found dead.

As if navigating an industry full of backstabbing and ruthless ambition weren’t difficult enough, they have to do it while hiding their new relationship from their coworkers.

Tonight’s episode:  It’s Becket’s first day back at work and Castle thinks she looks sexy, she changes her top and tells him she has to look normal. She reminds Castle that NYPD has a strict policy about co-workers dating and he assures her that nobody is going to find out. Becket gets a call, there is a murder, then Becket reminds Castle to act normal, they are both single in front of everyone.

On the scene, Castle doesn’t bring Becket coffee and Esposito is the first one to notice. The victim Mandy Michaels, is the weather girl. Lanie finds there is something different about Becket. The victim looks like a mugging gone wrong. She was last seen doing a weather spot at a children’s hospital late the night before.

Esposito and Ryan find Mandy’s purse, with a guy named Jonathan that has priors for stalking and indecent exposure. He claims that he found it in a dumpster.

At the station, they find a note in Mandy’s purse that reads, “If any of this gets out I’ll kill you.”

Lanie says It wasn’t a mugging, someone tried to change things up, she then goes on to tell Becket that she had sex and wants to know who it was with, Castle turns to Becket and says, “yeah, who did you have sex with”.

Castle and Becket head to the TV station where Mandy worked and finds out that she had a scuffle last night with a co-worker, Rebecca. The camera man turned off his camera and broke up the fight, an hour later Mandy was dead.

Victoria admits that she hated Mandy, but that wasn’t a reason to kill her and they should be looking for the person who picked her up last night in the silver wagon.

Becket is on the phone, meanwhile Castle bumps in to Christina who works at the TV station and invites him out that night. Becket is not thrilled and knows she is the reporter who shows up for cover stories in her bikini.

Becket and Castle talk to Mandy’s makeup artists and find out that she was dating sports star Reggie Blake. Esposito and Ryan go to pick up Reggie and get a hard time by two tough body guards, one of them hits Esposito right in the face.

Castle is getting worried because Esposito and Ryan are gone a long time when all of a sudden they are back and Esposito has a black eye. Reggie apologies to Esposito, but he wants nothing to do with it. Ryan tells Esposito that they know about the affair, Reggie claims that there was no affair, he is on the hospital chair drive and they were both leaving together. Esposito asks him about all the phone calls and he tells him that she wasn’t like that, they were just friends.

Reggie claims he dropped her off at the park at 10pm, she seemed nervous. A few days before, Reggie picked her up from the emergency room, she wasn’t a patient, but she was pretty upset about something.

Esposito checked out Reggie’s alibi, it checks out.  Ryan gets some more information, Mandy was dating Reporter Miles Hackston, they had been seeing each other for a couple of months. In the beginning they were on a high, then it fizzled. Their co-workers never found out and if they did, it would ruin his chances of advancing in his career. Miles thinks there was something bothering Mandy the week before, but doesn’t know what it was.

Esposito found out that Mandy was treated in the ER for an extreme asthma attack, the weird thing is that she arrived at the hospital by the news helicopter. The helicopter driver claims that he flew Mandy over Jersey, a matter of life and death to her, then she had an asthma attack.

Castle is having his interview with Christine and is asked if there is anyone special in his life, he says no and she asks him to dinner. Castle doesn’t know what to say, Becket is mouthing the word “no”, then Castle says, “I would love to”.

Later, Castle tells Becket the date with Christine is the perfect cover up, nobody will then suspect that they are dating.

Mandy stole equipment from Rebecca, the monitor indicates high levels of serene that causes respiratory problems – Mandy was on to something. At the hospital, Castle and Becket ask other patients some questions, it appears that Mandy asked a lot of questions about Conway field. Mandy knew about toxic chemicals that were being leaked by George Cazouli, a hot headed factory owner, from his carpet company. They bring Cazouli into the station and after some pressure from Castle and Becket he loses it front of them, he  admits that he wrote the note to scare her away.

A search warrant of Cazouli’s office finds that Mandy had a partner with her because there was no way that she could be in two places at once. Castle has to leave for his date, Becket gets back down to business without him. Christine shows up at Castle’s apartment, with oysters and chocolate covered strawberries to get in the mood.

Ryan spoke to everyone at the TV station, nobody will admit to being Mandy’s partner. Ryan tells Becket that Castle is going to be seduced by Christine, she is notorious for it.

Christine is hitting on Castle and she accidentally hits his phone and it dials Becket who gets an ear full, but she misunderstands what is going on and thinks there is something wrong with Castle. Becket arrives, gun drawn and finds Christine in her bra and underwear over Castle.

Castle claims nothing happened and he’s going to make it up to Becket. Castle and Becket arrive at the TV station, they want to speak to Miles. Turns out, Christine told Castle that he has a boyfriend and lied about what he was fighting over with Mandy. She was his partner and he killed her because she was going to turn over his story and he would lose his big exclusive. They found gun shot residue on his clothes in his hamper, they’ve got him. Miles claims it was an accident, he only meant to scare her. He wanted the files back, but she fought him and he grabbed for the gun that he didn’t know was loaded.

Becket leaves the station, shortly after Castle leaves only to show up at Becket’s house with an apology for going on a date with Christine. Becket says she doesn’t want to have to worry about him with other women. Castle would prefer to be amazing and not work together, he is convinced they can find their way. Becket doesn’t want them dating other people, Castle agrees and when he goes to kiss Becket she tells him it is too soon, all she can see is Christine’s boobs in his face.