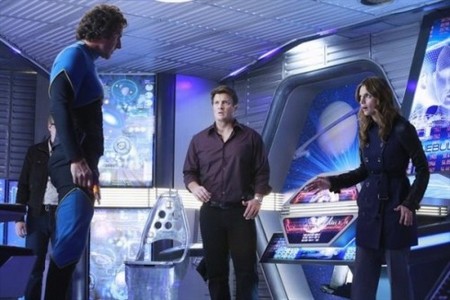 Last week on Castle found Richard Castle being investigated for murder when the evidence against him mounted.  Did you see the episode? If you missed any of it, you can read the full recap HERE.

On tonight’s episode the focus turns to “The Final Frontier” Castle will boldly go where few crime investigations have gone, to a sci-fi convention. Where the last episode was very serious, this one will certainly be more entertaining when we go deep into the realm of science fiction when a sci-fi fan is murdered at a sci-fi convention. The murder victim’s name is Annabelle, she was in charge of the Nebula 9 Fan Experience.

“The Final Frontier” will give us a glimpse into classics like Star Trek, Star Wars, anime and Firely. Castle will expose a world of egotistic celebrities, diehard costumed fans and tons of drama to fill several galaxies.

Becket reveals her geeky side, she was a Nebula 9 fangirl back in college. Meanwhile, Castle is such a big fan of a certain Star Wars character that he actually has a life sized version in his bathroom.

In a Castle “shocker”, Castle bumps into Alexis at the convention and is shocked at her revealing anime outfit, it’s the sexy side of sci-fi. This special sci-fi episode has a bevy of very talented actors guest starring; Armin Shimerman (“Star Trek: Deep Space Nine”), Ed Quinn (“Eureka”), Christina Moore (“True Blood”), Erin Way (“Alphas”) and Chris McKenna (“One Life to Live”) guest star in this episode, which is directed by Jonathan Frakes (“Star Trek: The Next Generation”).

To be honest, I don’t think I have ever been this excited to see a Castle episode. It’s going to be like Castle and Comic-con all in one.

Tonight’s episode is going to take Castle and Beckett’s relationship to another level – if fact, it’s going to knock fans into the next frontier, you won’t want to miss it!