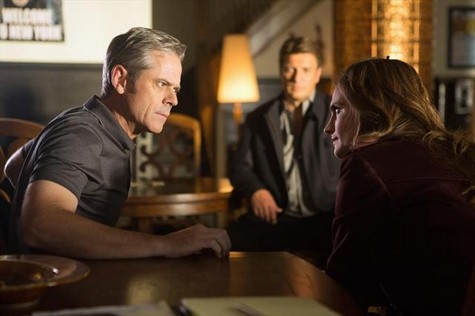 Tonight CASTLE returns to ABC with a whole new episode called “Swan Song.” On tonight’s show Beckett and Castle are followed by a documentary crew as they investigate the murder of a rock star.   Did you see last week’s episode?  We did and we have a full and detailed recap here for you.

On last week’s show when a body is found at a sci-fi convention, Castle and Beckett are warped into the heart of fandom — a world of egotistic celebrities, diehard costumed fans and enough drama for two galaxies.  In a Castle “shocker”, Castle bumps into Alexis at the convention and is shocked at her revealing anime outfit, it’s the sexy side of sci-fi.

On tonight’s show when the lead guitarist of a rock band is murdered, the documentary crew that were following the band turn their cameras on Castle, Beckett and the team as they try to solve the case. The result is a documentary style episode of “Castle,” which offers us a unique glimpse at our characters as they navigate a world that goes far beyond the rock & roll stage.

Tonight’s episode is going to be great and you won’t want to miss it. So be sure to tune in for our live coverage of ABC’s Castle tonight at 10PM EST! While you wait for our recap, hit the comments and let us know what your think of Castle season 5, so far?  Hit the comments and let us know your thoughts and enjoy some pics of tonight’s episode below!

Tonight’s episode: Tonight Castle begins at a practice session for a band and they are missing their lead singer, so the band heads into his trailer with a camera to wake him up only to find him on the floor dead and covered in blood. Ryan, Beckett and Esposito are on the scene, Castle not far behind them. Cameras are on and Becket is not happy, but there are filming a documentary. They find the murder weapon, the victim, James Swan, was killed with a guitar, his favourite.

Castle calls the murder a crime of passion while Beckett is trying to figure out who was in the trailer the night before when all of a sudden someone is banging on a door, it is a girl that was locked in the bathroom. She claims that she met James in his trailer every night after the show, but she doesn’t remember the night before because she partied to hard, her name is Butterfly and she only remembers hearing a horse, horse hooves crunching in the snow. Butterfly says that James was complaining about the other guys in the band because they were arguing lately.

City Hall has decided that it is good PR for the guys to continue filming their documentary, so Beckett and the team need to cooperate with them.

It turns out that James ditched band practice the day before. Meanwhile, footage from the documentary shows that over a month ago a there is an older guy in the background with a white van, the same guy is in the most recent footage as well.

Ryan and Esposito track down the white van by the licence number and when they locate it, gun shots explode and they find their guy who just so happens to have blood splattered overalls in his van.

It turns out that James ditched band practice the day before. Meanwhile, footage from the documentary shows that over a month ago a there is an older guy in the background with a white van, the same guy is in the most recent footage as well. It turns out, the guy is Butterfly’s father and he was following James to keep on eye on his daughter, he also claims that the blood is his own and it was.

The good thing about this guy following James is that he knows where he was the day he was murdered, he was running an errand and that is why he missed band practice.

Lanie reveals to Becket and Castle that the victim had none of the standard immunizations. Esposito found out why James was out running that error, it was to visit a guy named Sam Spear and they are headed over to see him. Apparently Spear was suing James for a song that he claimed he wrote. James was taking the music into a different direction and didn’t want the band to know, this is why he was secretly meeting with Spear.

Castle and Becket approach Keith, one of the bad members and he totally freaks out when he is accused of killing James. Beckett brings Keith into the station and drills Keith, she tells him that there is a witness that places him in the trailer at the time of death. Keith admits being there, but claims he left after they talked.

It turns out that James belonged to a cult, that is why he was not immunized, he belonged to John Campbell compound. Beckett interviews another person who belonged to the compound, Caroline and she says that Campbell swore that he would get revenge on James for leaving the compound.

Castle and Becket interview Campbell who tells them that he is in town fundraising. Becket reveals that she knows James gave him $20,000.00, but Campbell claims it was a donation. Campbell loses it and says that if they contact him again he will sue for religious persucution.

Back at the station, Ryan finds out that Buck Cooper also went missing from Campbell compound and Eposito thinks that James went back to the compound to get him. Beckett and Castle meet with Buck and he wants to help them but he doesn’t believe that Campbell killed him because he promised not to after he took the money and he believed him.

The change in direction that James wanted to do to the band was to bring Buck into it.  Becket calls Zeke into the station and tell him that they found some of his clothes with specs of James Swan’s blood on it. Zeke loses it, James told him that he was out of the band and he was pissed because he wanted to replace him with some roadie, he didn’t mean to kill him.