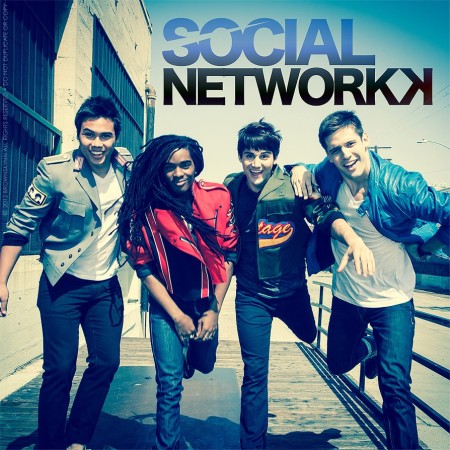 Describing itself as a lover of “feel good music” Social Networkk is comprised of four very different guys with one very similar goal – to produce some of the best hand-slappin’, hair-whippin’ pop music of its generation.

And it’s fitting the quartet used the technological methods of their generation to find each other. Ruba Wilson, Max Ehrich, Cy Jones and Jobob Taeleifi may be a boy band but they didn’t come together in some micromanaging producer’s office, rather they searched for their sound and each other using social media sites (hence the name).

“I just thought what better place to find new face faces/voices than online…. that’s where it is. I’ve always wanted to be in a boy band. I started off as a host for several red carpets. etc. and I met Max at this Disney Movie premiere and we always stayed in contact via Twitter/Facebook,” Ruba said. “One day I said to Max I wanna start a band would you want to be a part and he was immediately on board. From there, we went on the search via Twitter/Facebook and found Cy and Jobob.”

And Social Networkk was born. After long periods of communication online, the boys met for the first time in the studio this year to record their first single, a remake of the Milli Vanilli monster hit, “Girl You Know It’s True”. The band chose the song because they insist it has the “feel good” groove that exemplifies where the band currently stands in its short life… and because Ruba looks like he jumped right off the Milli Vanilla CD cover.

“I swear – everywhere I went I would always hear people say ‘Yo, Milli Vanilli!'” Ruba explained. “I had not a clue who they were until I got invited to see Prince in concert and there’s a section in his show where he calls people up on stage and he just so happened to call me up on stage and said, ‘Milli Vanilli, is that you?’ And the crowd lost it and the rest is history. We just wanted stray away from the typical first single people would expect from us; we wanted to take it back old school when they did feel good records, and we hope you guys can agree with us Milli Vanilli’s ‘Girl You Know It’s True’ was a feel good record then and still is now.”

Timing played a major role in the genesis of Social Networkk. Boy bands are making a comeback with the likes of The Wanted and One Direction. As more and more bands step up to grab a piece of the pie, originality and innovation become increasingly important. Social Networkk says it will introduce both.

“History repeats itself and we just so happened to start a boy band during that resurgence. We aren’t your typical cookie cutter boy band. We feel as if we represent the world we live in,” the group said. “We’d like to think our differences within the band play a big role in our differences between other bands. We all come from different backgrounds and have different looks and sounds. It’s an interesting mix overall. Really as cheesy as this may sound, we want to inspire people everywhere and let them know that you honestly can do anything you set your mind on. We weren’t ever the popular kids in school but doing what we love takes the cake cake cake cake cake!”

With one single down, the band hints at recording its first album and organizing a tour to go along with it. And you better believe you’ll hear all about it on your twitter, facebook, instagram, and other social media pages!

“Social Media is all around us! It’s the new wave of communication. Thank God for Twitter, Facebook and countless other sites,” the group said. “It has basically broken the barrier between fans and the artist. A few years ago it used to be ‘fans’ and the ‘artist’ but now they are our friends. If we can’t decide on what to eat or what to wear they can give us their opinion or whatever. We’re sure they will. We must say, it’s a dope idea!”

Take a peak below at the video for Social Networkk’s single, “It’s True”. What do you think? Leave us some comments!