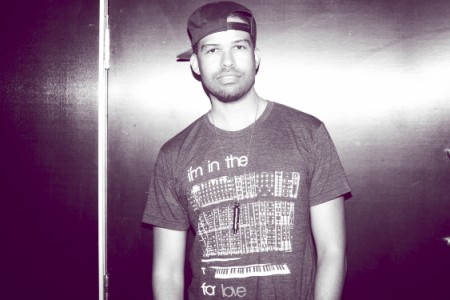 With the hit Party Rock Anthem, which Goonrock wrote and produced for LMFAO, celebrating its continued success by being on Billboard’s Top 100 Chart for 67 weeks, Goonrock is riding a career high. But the entertainment renaissance man isn’t ready to rest on his laurels just yet. It took the writer/producer/singer years to experience this kind of sensational success, and while he’s willing to relish the acclaim, he isn’t ready to forget how hard it took him to get it.

“It feels amazing,” Goonrock said in an exclusive interview with CDL. “It gives me a chance to get more of my music heard because now I have the public’s ear. There was a long while there when it wasn’t so easy.”

Growing up in New Jersey and Chicago, Goonrock was surrounded by a musical family. His mother was a singer and the house was always filled with his father’s favorites including Nat King Cole and Harold Melvin and the Blue Notes. Having a career in music was just the logical step.

“It’s all I ever saw myself doing,” he explained. “I love being able to speak to people through music and to evoke an emotion. This is what wakes me up every morning….”

With a sound he describes as ever-evolving and “uplifting, feel good, dance”, Goonrock quietly chugged away at his craft in California over the last 10 years hoping to get noticed. Eventually he did by such heavyweights as Kanye West and Dr. Dre and even worked with Master P and Ne-Yo but it wasn’t until his collaborative effort with LMFAO spawned Party Rock Anthem that he became a name to be remembered among his peers in the industry.

Now his latest projects include producing two tracks, Goin’ In and Clothes Off for Jennifer Lopez. She performed Goin’ In, which Goonwock also co-wrote, featuring Flo Rida, on the season finale of American Idol. The track is also featured in the upcoming film Step Up Revolution, the fourth installment of the hit dance film franchise. He’s also been working in the studio with YouTube sensation and breakout chart-topper Carly Rae Jepsen.

But despite the current demand and national exposure (the video for Party Rock Anthem is among the Top 10 Most Viewed Videos on YouTube with a staggering 459,775,703 views and counting) Goonrock still hopes to stay a man behind the scenes. He’s admitted meeting other famous stars like ‘pro’ Jennifer Lopez was incredible, and that her solid work ethic was insightful, but Goonrock has no ambitions for the superstar life. He views iconic producer/performer Quincy Jones as a mentor of sorts admiring his longevity and ability to bridge the gap between different cultures and genres of music during unstable times.

“I never wanted to be a performer/celebrity. I am passionate about making music. I would never want to establish a career that took me away from my day to day creativity,” he said. “I thrive in that environment. Fame comes with the territory and I wouldn’t run from it but I definitely don’t chase it. I achieved my objective by singing the chorus on Party Rock Anthem as I had a particular way I wanted it to sound/feel. It took me around the world and connected me with many fans. I’m super thankful for that. It was an incredible experience.”

And it is an experience that will help Goonrock keep making music, but more importantly, the music he wants to make.

“My dream is to be a consistent, respected writer/producer in the industry introducing new talent and enhancing existing talent, constantly pushing myself to reach new heights,” he explained. “Party Rock Anthem achieved such phenomenal success and it was heard around the world. It reached so many people. My goal is to have a career filled with many more of those….”

Are you as obsessed with Party Rock Anthem as everyone else? Check out the video below. Have you heard Goin’ In? Sure to be another hit?