CDL Exclusive: Pippa Middleton And Andre Balazs Together At US Open (Photo) 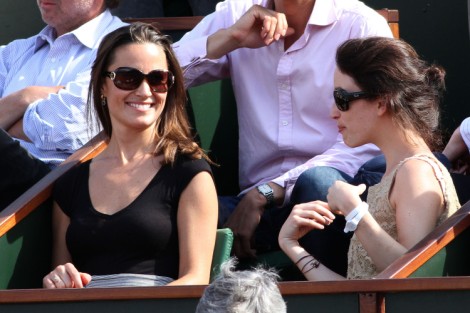 Sitting next to Andre Balazs, Pippa Middleton was just spotted enjoying a tennis match at the US Open this afternoon. Our pic is a little fuzzy but I could spot those long, brown tresses anywhere! Check it out below. Pippa is sitting to the right of the lady in pink and to the left of hotelier and flirty friend, Balazs. Can’t be sure but my guess is she’s watching the quarterfinal match between Victoria Azarenak and Aussie Samantha Stosur.

Why did I not know Pippa was going to be at Arthur Ashe stadium today?! If there’s anything we know about Kate Middleton‘s little sister it’s that she loves her attention and her tennis. She got both while filling in for the Queen and accompanying her sister to the Wimbledon finals earlier this summer and apparently she’s been getting all the attention a girl could want with Balazs these last few days.

Page Six reported the hotelier and the aristocrat have been getting mighty cosy since Pippa flew over to work on the publicity for her upcoming party planning book, “Celebrate: A Year of Festivities for Families and Friends.” Before you freak out at me, I know Pippa’s not technically an aristocrat but that doesn’t mean she’s any less of a catch!

When Pippa hasn’t been in meetings, she’s flown to Shelter Island on Andre’s seaplane and joined him at his resort, Sunset Beach. Page Six said it’s been “flirt central” between the two. The tabloids are running wild with romance stories but last I heard Pippa was still with boyfriend Alex Loudon. I can’t imagine the royal family or Kate Middleton would be too excited about Pippa coming over to America and flirting with every available rich guy in her path. Since the Prince Harry scandal, discretion is even more of a virtue to those bluebloods and Pippa’s been desperate to stay in their good graces since her gun debacle in Paris last Spring!

Still though… she’s spending an awful lot of time with Andre. Do you think something could be brewing at the US Open? Pippa is one of the most illegible woman in the world. It never hurts to play the field!