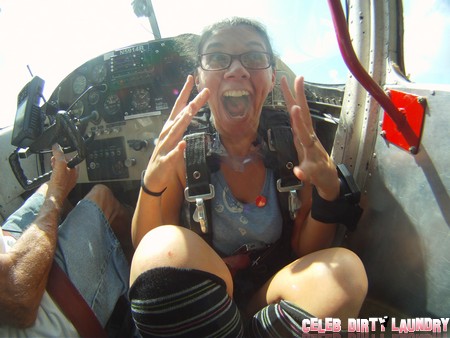 It was my special day and how did I spend it? Not out in the clubs drinking, not getting drunk, not a birthday dinner, but instead I felt inclined to instead go tandem skydiving for the 2nd time in my somewhat young existence.

I had convinced my friend that he needed to go with me because hey, I only turn 28 once. The poor boy, I was more worried about him having a panic attack before we reached our destination, a three hour car drive away by the coast of our state. Every time we counted down his voice got higher and higher with a screeching laugh. Good God, what have I done to him I kept thinking? We arrived with it was a downpour, great, it was beautiful up until then. Awesome, we spent all that time and we were going to have to turn around, but our luck (or mine, not his) changed and it stopped after 15 minutes.

Game time. We had read our waivers and signed our lives away – we were strapped in our gear and ready to go! My instructor was an awesome little lady who was so bubbly I envied her life and career choice. My friend’s instructor was an older man who was about 8 inches shorter than him. We got in the plane and I could see the fear take over my friends face. Me, on the other hand, well I was pumped and ready to get to 11,000 feet already, although I couldn’t help but squeal when I saw the pure terror that was my friend.

At 8,000 feet up, about five minutes into the flight, we were instructed to turn around and get buckled onto our respective instructor and get our goggles on. Woo hoo! They fit over my spectacles, what a relief! I wanted to see what was happening after all, or did I… At 10,000 feet the door was opened and it was then I realized what it was that scared me the first time I went, but no, not this time. Put my feet on the tiny little foot stool with my butt scooted up to the edge, Laura my instructor bounced back and forth three times and I was out of the plane.

It was glorious, but it just didn’t last long enough. We did a few somersaults, or at least they were somersaults to me and then Laura tapped me to open my arms up so I would stabilize. I did and within probably 15 seconds she tapped me again to let me know the shoot was going to open. When that happened we had about five minutes of looking at the coastline view which was beautiful, much different from just seeing it on a plane. Laura let me “steer” the chute, which I found a little difficult on the left side since she couldn’t help me as she had the camera/camcorder combo on her wrist and was taping me. Oh well, it didn’t matter because at that moment I realized I forgot to look up to see if my friend made it out of the plane. He did, phew!

We landed and I even found it in myself to stand up and not tumble like I did the first time, win! My friend landed about two minutes later with a big smile on his face telling me “I don’t know how you talk me into these things, but it was worth it.” That’s all I needed to hear for my birthday!

Photos Courtesy of the Author