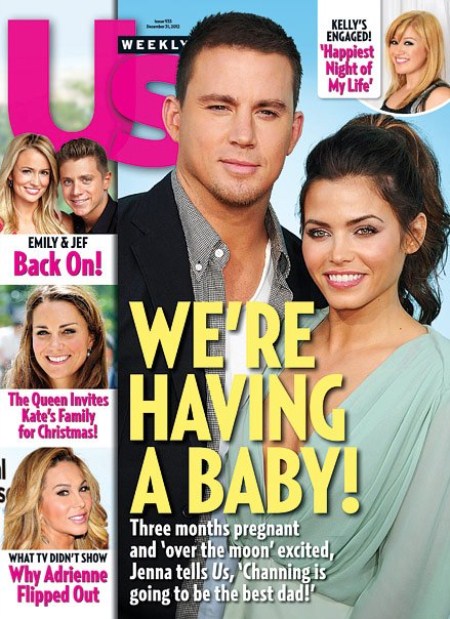 The current issue of US WEEKLY features the cover story, “Channing and Jenna Are Having A Baby.”  The Magic Mike star, Channing Tatum and Jenna Dewan Tatum confirmed to the magazine that after three years of marriage they are expecting their first child together.  The couple met on the set of the 2006 film ‘Step Up’ and maried in Malibu, California on July 11, 2009.   “Jenna Dewan-Tatum and Channing Tatum are pleased to announce that they are expecting the birth of their first child next year,” their rep confirmed.

An insider for US Weekly claims that the pregnancy was a total surprise.  Earlier this year Jenna mentioned that she would like to have children, but at the time there were no plans.  She did say if it was meant to be, it would happen.  So it looks like it has.  Jenna is three months pregnant and is “over the moon” excited about the pregnancy.  She said that hubby Channing is going to be the best Dad.

Channing plans to take one year off to spend with his wife during her pregnancy.  The timing is perfect since he recently told Entertainment Weekly that he wanted to step back from acting to focus on a few behind-the-scenes projects with his production partner, Reid Carolin (who also wrote the screenplay for Magic Mike).

This week’s magazine also has all the details on how Kelly Clarkson’s engagement was the, “Happiest Night of her Life!”    Kelly became engaged to Brandon Blackstock – Reba McEntire’s stepson last weekend.

To find out all the details of Jenna’s pregnancy, the couples joy and a whole lot more, pick up the current issue of Us Weekly.