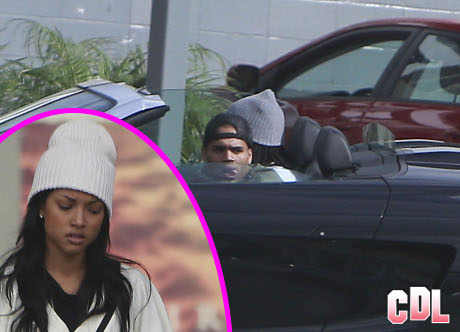 Rihanna and Chris Brown have been all over each other in the recent weeks, and we’re not quite sure what to make of it. Many people still are very angry with Rihanna for running back to Chris; however, it seems as if some, including Rihanna’s father, approves of the relationship. A little bit anyways. Her father, Ron Fenty, was quoted with saying that he would give his blessings to Rihanna if she wanted to marry Chris. But is Ron now calling a take-backs on his comments? It seems as if Ron is a little bit out of the loop, and he expressed his approval of marriage before realizing that Chris is not completely over Karrueche Tran.

Karrueche is the girl that stood beside Chris when no one else did. She is the one that was with him when he was taking quite few hits because of the incident with Rihanna. He clearly loves both women and he has, in fact, admitted to it. Torn between two women; I think he’s hardly ready for marriage. Chris was seen out and about with Karrueche — just two days after hooking up with Rihanna at a Beverly Hills shindig.

“They are hooking up, but they are not dating exclusively,” says an insider for E! Online. “They just started back up again. Rihanna and Chris are also hooking up. It’s all a bit of a mess, but it’s a dynamic that has been going on for a while. Everyone thought Chris and Karrueche were completely done, but he’s one of those people that everyone is drawn to. Plus he’s selfish and he has a way to make people do things the way he wants them done.”

In all reality, Chris was the last man Rihanna dated, and she still seems to be holding onto her past with everything she’s got. Matt Kemp doesn’t count. That fling was too brief. It seems as if Rihanna might be mistaking desire for love, two very different things in my book.

Chris rushed out of the relationship with Karrueche supposedly because of Rihanna — only to realize that he wasn’t completely over Karrachue. This has unfortunately put Rihanna in an awkward and, yet again, embarrassing situation. Rihanna deserves better and hopefully she will find it. I wish she’d get it through her thick skull that she’s not going to find it with Chris. Share your thoughts on the Chris Brown and Rihanna relationship. Do you think this relationship could, in some far off distance world, translate into a win?