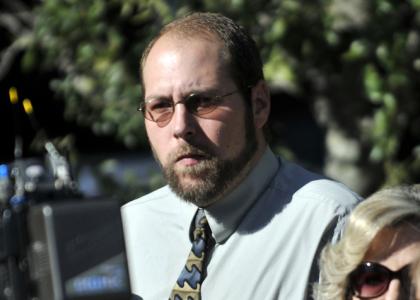 A year after nude pictures of Scarlet Johansson and Mila Kunis rocked the internet, phone hacker extraordinaire Christopher Chaney has been sentenced to ten years in prison. The 36-year-old techie pled guilty to nine felony counts for identity theft, wiretapping, and unauthorized access to a computer, including damage. The defendant was originally accused of over 50 counts of hacking, which could have lead to life in prison, roughly 120 years! Chaney was also ordered to pay $76,000 in restitution to Scarlet, Christina Aguilera, and Renee Olstead.

Prosecutors recommended to the judge last June that he pay over $66,000 to Scarlet alone, for her troubles. They also suggested $7,000 to Aguilera and $76,000 to Olstead alone! At this time, we’re not sure how the total he’s been ordered to pay will be divided amongst his victims. Chaney was offered a plea bargain in exchange for pleading guilty that included him turning over his electronics and getting a reduced prison sentence. Of course, if Lindsay Lohan has taught us anything, it’s that good behavior means an early release, so we don’t expect Chaney to be locked up for a full decade.

Now, we have to ask: does this guy really deserve a decade in prison? I mean, you shouldn’t hack people’s computers, or steal identities. But this all got blown up because of the celebrity involvement! Normal people who get hacked see justice in the form of a slap on the wrist and a fine! But when the A-list celebs get hurt, the defendant is going down! I think Chaney would have gotten a much shorter sentence if the case hadn’t received so much media attention. Sure, he did wrong. But he isn’t a violent criminal, and the whole sentencing screams “Scape goat!” to me! What do you think? Did Chaney earn his sentence, or is he really just paying the price for messing with Hollywood?