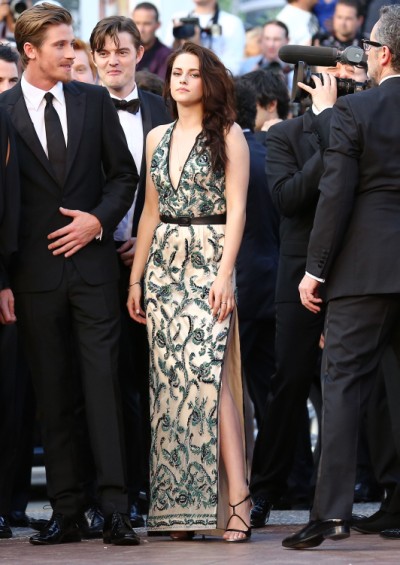 Um… my guess would be to tell them she’s NOT REALLY BELLA SWAN. Oh, and if you take your children to see this movie, then you should first explain to your kids why you’re a bad parent before you have the heart to heart that vampires aren’t real.

But relax Kristen. These conservatives aren’t only pointing the finger at you. Anne Hathaway, Miley Cyrus and even Saved by the Bell’s Elizabeth Berkley (I know, random, right?) are corrupting America’s young girls by doing their jobs.

“We’ve watched and been saddened by the parade of former Disney stars getting used, so that any wholesome image they have is destroyed — Britney Spears, Lindsay Lohan, Miley Cyrus and more. But it’s not just them,” Gainor continued. “It’s a common theme from actresses like Elizabeth Berkley from Saved by the Bell who appeared in the tawdry Showgirls or Anne Hathaway who went from every girl’s dream role model in the Princess Diaries to a nude scene with Jake Gyllenhaal in Love and Other Drugs.”

This is almost too stupid to comment on – but I will, you know it! So is this dude saying the end all be all role for women is to play pretty, pretty princesses? If this dude was even remotely rational I’d be offended. Thankfully, I’m not. What he fails to understand is that these “tawdry” roles he mentioned are some of the best movies these actresses have done. And why the double standard? Leonardo DiCaprio started his career on Growing Pains. Zac Efron and Justin Timberlake were Disney darlings along with Cyrus and Spears before they went on to bring their sexy back. Gyllenhaal was in Bubble Boy for Christ’s sake! Why not call him out for the nude scene?

Now, I’ve worked myself up! Ugh, I’m going to forget this dude and move on. Am I overreacting? Do you think Gainor has a point?