BY Jeanne Adams on May 30, 2012 | Comments: one comment
Related : Kim Kardashian 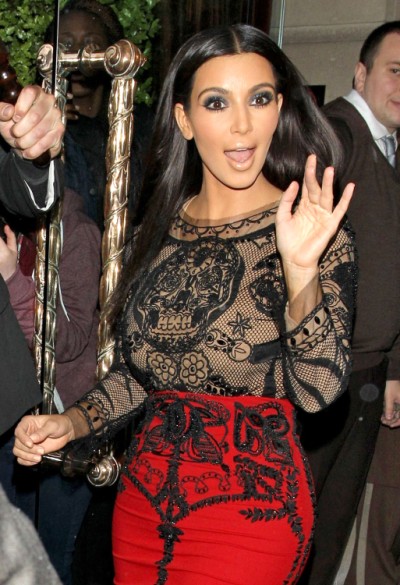 A convicted felon, who has spent more than 10 years in prison, filed a motion that he has made two sex tapes with Kim Kardashian and that he lost his virginity to her on a plane while on a romantic vacay to Armenia. If you had to pick, which part of that do you think is true?

Oh, all right, I guess I don’t believe any of it either. And neither did the judge who denied Jonathan Lee Riches’ motion to be added as a plaintiff in Kim’s lawsuit against The Gap and Old Navy. She’s suing the affordable clothing giants for using look alikes in their ads without her permission. Poor Kim Kardashian. You do one sex tape and the whole world thinks they can make one with you!

But I’ll believe Kim actually loved Kris Humphries before I’ll believe this shmuck. RadarOnline.com confirms he just happens to hold the Guinness World Record for being the most litigious person in history with more than 2,600 lawsuits under his belt since 2006 alone. The professional fraudster has also filed suits against, Martha Stewart, Britney Spears, President George W. Bush, Jeff Gordon (naturally) and… wait for it… Somali pirates. How do you sue pirates? You try and you try again, that’s how. I’m beginning to respect this guy’s initiative! I mean, how many guys can say they’ve made one sex tape with Kim Kardashian? Riches ups the ante to two. I’m telling you… initiative.

And Riches’ got a flair for the dramatic! In the motion, he writes, “I have been in an intimate relationship with Kim Kardashian since 2001. I lost my virginity to Kim Kardashian on a Virgin Air Flight en route to the Armenian Hilton Hotel. I spent 125 months in federal prison for credit card fraud and identity theft and Kim Kardashian forced me to do fraud crimes to finance her lavish lifestyle and bankroll her career…I borrowed Ray J‘s camcorder and me and Kim Kardashian made 2 sex tapes with her in Gap clothing. I have those 2 tapes and all the photographs secretly saved at a YMCA gym locker in Philadelphia to show as evidence.”

Do I want to ask why the photographs are in a gym locker in Philadelphia? No, I don’t. He goes on. “Kardashian is now threatening my life since I got released from prison on 4/30/12, telling me if I expose our relationship that she is going to get her sister Khloe’s husband, Lamar Odom’s basketball buddies to come hunt me down and stuff basketballs in my throat to shut me up. Im so scared, Im whistleblowing now, because Kim Kardashian should of went to prison for my crimes, I did it all for her.”

That’s kind of sweet in a sick, stalker, I want to peel off your skin and wear it on my face sort of way. It does seem like he tunes in to the show though, so maybe Kim shouldn’t be that upset. She wouldn’t want to lose an avid watcher. You’re only as important as your last Nielsen rating, after all.