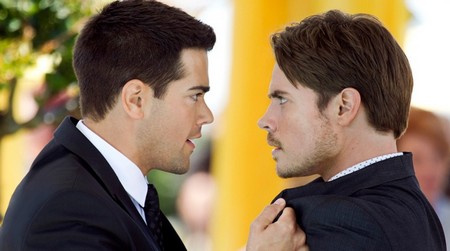 Tonight on TNT is an all new episode of Dallas. On tonight’s show there is a lot of drama between the newlyweds. If you missed last week’s show called “The Last Hurrah”, we have a full and detailed recap for you here.

Have you been watching the new Dallas? The rebooted show is a continuation rather than a remake and focuses on the children of Bobby Ewing and J.R. Ewing.  The new cast includes Josh Henderson, Jesse Metcalfe, Jordana Brewster, Julie Gonzalo, Brenda Strong, Patrick Duffy, Linda Gray and everyone’s favorite, Larry Hagman.

On last week’s show J.R. couldn’t wait to pay a visit to Cliff and Sue Ellen basically to gloat about Bobby selling Southfork to someone other than them. Bobby and Ann planned a barbeque at Southfork before moving.

John Ross met up with Rebecca and presented her with the supposed proof that she sent the email to Christopher that broke up he and Elena.  Obviously, John Ross is a “chip off the old block” and has set her up in order to blackmail her.

On tonight’s show, the drama reaches a an all time high for the newlyweds, Christopher and Rebecca as the deed for Southfork becomes relevant and causes family bonds and ties to completely shatter.

Ann counters J.R.’s machinations with some mystery person from her past. Meanwhile, Christopher realizes that he has to take his gloves off and fight hard for what he believes in.

Tonight’s episode is going to be an exciting and explosive one that you won’t want to miss, so be sure to tune in for our live coverage TNT’s Dallas tonight at 9PM EST!  While you wait for our recap hit the comments and let us know what you thought of last week’s episode 4 of Dallas season 1!

RECAP: Rebecca tells Christopher that John Ross is blackmailing her, she then reveals that Tommy sent the email to Elena that caused their breakup and made it look like she sent it. Christopher is not taking the news well, he walks away clearly disgusted.

Christopher runs back to the barbeque and punches Tommy in the face for sending the email. Tommy admits it and Bobby tells him to get off the ranch. Christopher goes into the house and starts to remove Rebecca’s things from the closet and tells her to make sure he never sees her again, Christopher leaves.

Elena apologizes to John Ross for thinking he sent the email and tells him that she is done with Christopher.

Bobby is worried about Christopher when a courier arrives with papers, it’s the deed to Southfork and it’s in J.R.’s name. Bobby confronts J.R. who tells him that he found out that Cliff Barnes was going to take Southfork and he had no choice but to take it from under him. Bobby is furious and wants to carry on his mother’s legacy, while J.R. says that he is going to carry on his daddy’s legacy and plant more oil wells. Bobby threatens to take down J.R., while J.R. stands their with a cunning smile on his face.

Christopher arrives back at the house and Ann tells him that J.R. stole Southfork. Bobby and Christopher head right to Mitch Lobell’s office, only to find it empty.

Lobell lied to Bobby and he now knows all the truth; J.R. owns Southfork and there is nothing he can do about it.

Tommy threatens Rebecca, he put in two years and plans on becoming a millionaire no matter what.

Elena goes to see John Ross because she found out that J.R. owns Southfork, John Ross denies that he had anything to do with it and Elena knows that he is lying.

Christopher and Bobby see oil tankers driving on Ewing land and head to Southfork to see J.R. but he is already gone. Bobby tells Ann that J.R. has covered his tracks really well and it’s going to be tough to prove that he had something to do with it. Christopher feels that they have to fight the same way as J.R. but Bobby doesn’t want them to stoop to his level. Bobby tells Ann to start unpacking, they are not going anywhere.

John Ross goes to see the “fake” Marta, she has a picture of him kissing Elena and she is pissed because he promised that he had broken up with her. John Ross demands that she put his name back on the deed, she tells him it is too late to which he replies with a threat to stay away from him, or else.

Marta is watching a sex tape she filmed of her and John Ross. Meanwhile, John Ross is summoned by his dad who is at a football game.

John Ross tells his dad they were supposed to be partners, J.R. replies that he was supposed to show him the business and he is., J.R. is going out of town and handing the reins over to John Ross while he’s gone, he tells him not to screw it up. J.R. gives John Ross advice about the Marta, “don’t screw around with her, she can be dangerous.”

Rebecca calls Ann and asks to see her to explain it all in person.

Christopher sneaks into John Ross’s apartment, he finds a note on the pillow with a CD, when he plays it, it’s the sex tape he made with Marta.

J.R. leaves in helicopter and tells John Ross that he will return but it all depends on him.

John Ross walks into the house and finds Bobby unpacking, he tells him that he’s glad that they are not leaving. John Ross goes on to tell Bobby that he has nothing to do with this fight between him and J.R.  John Ross says that J.R. left town and gave him his power of attorney, he’s moving in to his father’s suite right away and starting drilling, he then tells Bobby to stay out of his way because he wouldn’t want to throw him off the ranch.

Rebecca is at dinner with Ann, she tells her that she wishes she could turn back the clock. Rebecca reveals to Ann that she is afraid of Tommy and doesn’t know how to get out.

John Ross goes by to see Elena, tells her that his father left him in charge. John Ross asks her to take a chance on him, but she tells him she can’t be a part of it.

Christopher is drunk and knocking on Elena’s door, he stays the night on the couch and the next morning Elena tells him to get out. Elena goes on to tell him that John Ross always has her back, unlike him and he almost takes out the CD from his back pocket, but decides not to.

Ann goes to see her ex-husband Harris, she wants him to cancel his contract with J.R. to move his oil. Harris agrees to do it because he doesn’t like J.R., but it will cost her a hug.

Christopher is back at John Ross’s apartment and plays the CD for him. John Ross tells him that the CD proves nothing, but Christopher is willing to take the chance and give the CD to the authorities. The look on John Ross’s face is priceless when he is watching his make out session with Marta, or should I say Veronique!