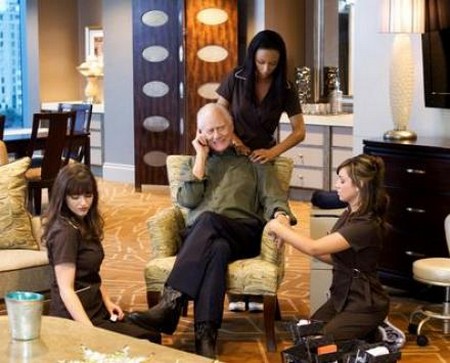 Tonight on TNT is an all new episode of Dallas. On tonight’s show titled “The Enemy of My Enemy” Rebecca approaches Bobby and Christopher with information that she believes might help save the ranch.. If you missed last week’s show called “Truth or Consequences”, we have a full and detailed recap for you here.

On last week’s episode the drama reached an all time high for the newlyweds, Christopher and Rebecca as the deed for Southfork becomes relevant and caused family bonds and ties to completely shatter. Christopher realized that he has to take his gloves off and fight hard for what he believed in.

On tonight’s show John Ross is bothered by the weight of having to do his father’s dirty work and decides to move into Southfork. Strife continues to grow between Ann and Bobby when it is revealed she went to her ex for help with a family problem.  Rebecca tries to get back into Christopher’s good graces again by trying to help him save Southfork.

Rebecca approaches Bobby and Christopher with information that she believes might help save the ranch.  Also on tonight’s show John Ross and Christopher have an explosive argument and they are fighting over J.R.  No surprise there, right!

Tonight’s episode is going to be an exciting and explosive one that you won’t want to miss, so be sure to tune in for our live coverage TNT’s Dallas tonight at 9PM EST! While you wait for our recap hit the comments and let us know what you thought of last week’s episode 5 of Dallas season 1!

Hey all, sorry, our regular recap-per called in sick 5 minutes before the show started.  So we will back back with the recap next week, in the meantime check out the recap below of tonight’s episode!