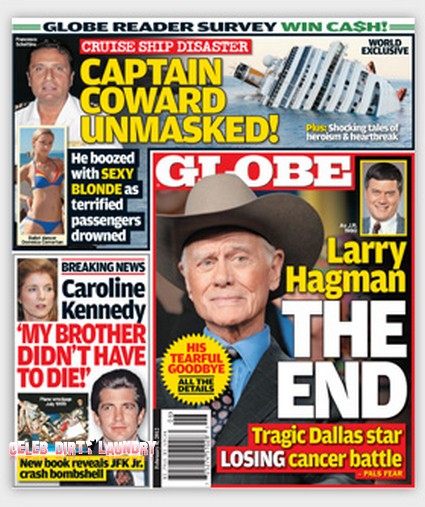 The current issue of Globe magazine features the cover story ‘Larry Hagman – The End.’  The magazine claims that friends fear that Larry Hagman, 80, who played the villainous J.R. Ewing on the 80’s television series Dallas is losing his battle to cancer.   The magazine has managed to get their hands on all the details including his tearful goodbye.

Globe has more:  “Beloved Dallas and I Dream of Jeannie star Larry Hagman is bravely battling cancer, but pals believe the 80-year-old TV icon has just months to live. Read the new GLOBE’s touching article about his courageous fight and see a shocking recent photo showing a gaunt and fragile Hagman, who has lost 25 pounds and appears to be wasting away. “

Larry revealed he was battling a treatable form of cancer in October of 2011.  He also said, “My treatments are going along very well” and also said, “As J.R. I could get away with anything – bribery, blackmail and adultery. But I got caught by cancer.”

Two weeks ago Larry told reporters that his recent cancer diagnosis hasn’t kept him from being a full part of the “Dallas” reboot.   So there you have the story – it seems to me Globe may just be speculating here – we hope they are wrong.

Also included in this week’s issue the magazine claims Caroline Kennedy is saying ‘My brother didn’t have to die!’  There is a new book that reveals JFK Jr. crash bombshell and of course Globe has the details.

To find out all this and more, pick up the current issue of Globe Magazine.