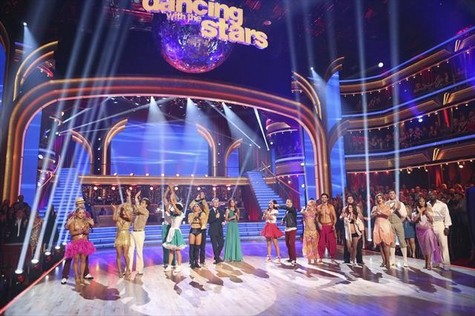 Tonight is an all new episode of DANCING WITH THE STARS ALL-STARS and this week is “Guilty Pleasures Week.”  We will be treated to two nights of performances and freestyle team dances from the remaining couples.  The competition is getting intense with two nights of dancing.

For  ‘Guilty Pleasures Week,’ as the competition gets extreme with two nights of performances and no elimination, on “Dancing with the Stars: All-Stars.” During night one, MONDAY, OCTOBER 22 (8:00-9:00 p.m., ET), four couples will dance to their selected ‘guilty pleasure’ song while the other four couples will perform their Freestyle Team Dance in the ballroom.

Tonight’s episode is going to have all the usual glitz and glam in the ballroom, which you won’t want to miss. So be sure to tune in for our live coverage of ABC’s Dancing With The Stars All-Stars Week 5 Performance Show – tonight at 8PM EST!  While you wait for our recap, hit the comments and let us know what you thought of last week’s episode of Dancing With The Stars All-Stars.

Tonight’s recap:  This week we have a two night competition performance shows and no eliminations.

Len: “I’ve got a tough issue, I am an ememy of the non-issue.  It took a little long to get started.  There were elements that I liked.  It was a tad on the raunchy side for me.”

Carrie Ann: “What I think was great is last week the sensuality was there.  I thought this week you were a little nervous, it was not your best, but it was a good try!”

Bruno: “For me it is always on, you are tasty tease, great spins.  The only thing for me is the Samba bounce.  But overall I thought It was a good routine.”

Len: “You turned October into hot October,  that was a blockbuster, it had everything.  I was a little concerned with how much Peta lifted her leg up.  But it was fabulous!”

Carrie Anne: “Let the baby making begin, that was ridiculous. (Carrie Ann fell off her chair mid sentence) That was worth the fall, it was gorgeous, the perfect balance between romance and sensuality”

Bruno: “That was not a dance, that was masterclass theater.  You were expressing every moment.  Gripping, thrilling.  The best performance I have seen!”

Len: “It was your best dance and you were dancing to the maximum”

Carrie Ann: “Kirstie I thought that was your best dance by miles, your carriage was lifted.  As far as quality of movement, excellent”

Bruno: “You had your toyboy where you wanted, you had a little wobble but nothing to be worried about.  Well done, your carriage was perfect.”

Carrie Ann: “No one does a Samba like you, you have the samba pleasure.”

Bruno: “Always switched on you always deliver maximum pleasure, you deliver the best party in the country!”

Len: “This was quality, as a group you were tight, as individuals this was perfect.  To learn a routing like this fantastic!”

Bruno: “The choreography flow the way you introduced you either it was almost impossible to identify the celebrity and the professionals.”

Carrie Ann: “It was fantastic, it was amazing, everything they said.”