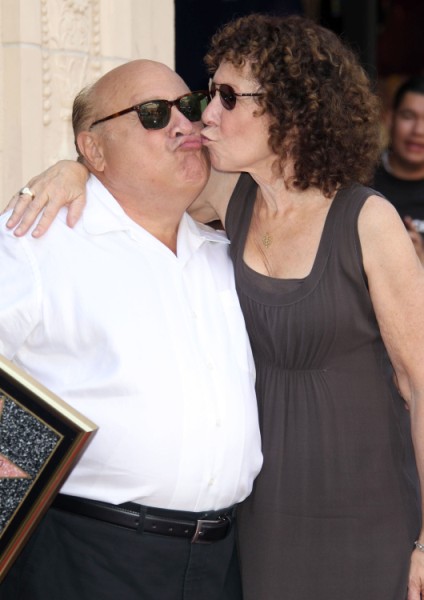 It was only a matter of time before Danny DeVito’s other women started crawling out of the woodwork and the details are pretty gross. A source told Radar Online that the It’s Always Sunny in Philadelphia funny man has been cheating on his estranged wife, Rhea Perlman for years and especially liked abusing his power on movie sets. Apparently Danny likes ’em young and isn’t afraid to pull the ‘ole “I can make you a star kid! But first let me see your boobs!”

“It was kind of pathetic because she was very young and beautiful and obviously just having sex with him in hopes that he’d make her a star,” a source told Radar Online about one of his conquests. “Danny would have his limo driver drive them all over the city and they’d canoodle in the back before going back to his room together. I felt bad for Rhea, and I felt bad for the girl, too, because she was just a naive kid from Pittsburgh. It was sad to see her pretending to really like him when really it was just because of who he was. And worse, Danny preying on vulnerable young girls like that.”

Apparently this source is referring to his time on the movie set of Hoffa. You know who else was in the movie? Jack Nicholson – just saying…. I’m not surprised they didn’t act like choir boys together. Let’s list out some of Danny’s other co-stars – Arnold Schwarzenegger, Michael Douglas, Mickey Rourke and he parties with George Clooney. Ya, those guys don’t have the best reputations for monogamy.

But before we get all judgey against the extras let’s think about it. I know when you look at Danny DeVito you say to yourself, “Ew! There’s no way I would touch that for anything!” But then maybe you see him joking with Nicholson and he tells you that you can make it in this town with the right friends and then you remember how funny he was on Taxi and then you guestimate he’s not that much shorter than you when you take your heels off and then you think, “Sure, why not.” I don’t condone it but I get it and I’m sure it happens much more than we all think.

So are you turned off that Danny DeVito cheated on Rhea Perlman with extras? He didn’t just cheat with these girls. He took advantage of them. Is that OK or should we expect it? And Rhea Perlman isn’t talking – yet. I doubt she will. It’s not her style. I suppose it depends on how much she gets in the settlement. He’ll want her to stay quiet so I doubt he’ll go cheap like his bestie Arnold.