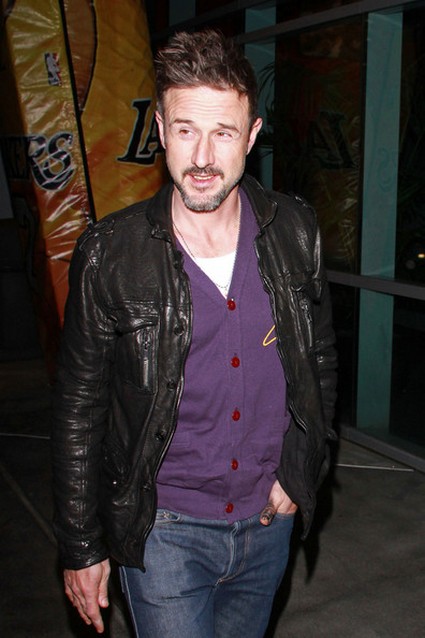 David Arquette and Courteney Cox are still proving that ex’s can remain really good friends as Arquette is scheduled to guest star on the season 3 finale of Cox’s ABC show “Cougar Town.”

According to TV Line, 39-year-old Arquette will appear as a “hotel concierge who offers to help Jules and the gang with literally anything.” Rumor has it that this season of “Cougar Town” will revolve around an engagement and wedding between Cox’s character Jules and her on-screen boyfriend Grayson.

Proving that there is no bad blood between them, Cox and Arquette playfully tweeted yesterday about his upcoming work on the show. “I’m so excited to act on #CougarTown @CourteneyCox @ChristaBMiller Can’t wait!!!” Arquette said. “@davidarquette I can’t wait to work with you. You better not be late.” Cox replied, jokingly warning her ex not to be tardy,

The former couple met on the set of “Scream” in 1996 and were married for 11 years before separating in October of 2010—reportedly due to Arquette’s heavy drinking. However, now one year sober, Arquette may be looking more attractive to Cox.

Cox was a frequently seen cheering for Arquette during his “Dancing With the Stars” stint and is always the first to sing high praise about her ex. “He’s my favorite person in the world,” she recently told People magazine. “No matter what happens in our future, he’s my very best friend.“

The former couple has commented that they stay so close for their 9-year-old daughter Coco, but there is definitely still some shared admiration there. Maybe by inviting Arquette to appear on “Cougar Town,” Cox is trying to get back that loving feeling they had while filming “Scream”. However, Arquette is reportedly not looking to reconcile and is still happily dating Joe Francis’s ex Christina McLarty who he gushed about on Howard Stern (aka. total rebound).

Ohhh…just quit pretending and get back together already!!! Courteney is the best you’ve ever had!

The third season of “Cougar Town” returns to ABC on Feb 14th with the episode “Ain’t Love Strange.”