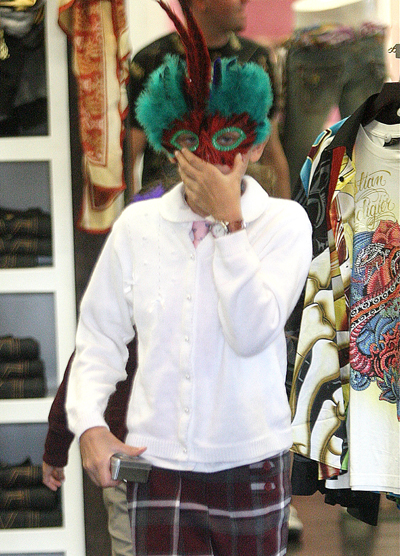 While Michael Jackson seemed like a mostly loving parent while he was alive, he certainly insisted upon a number of weird parenting quirks. Chief among them was his forcing his kids, Paris Jackson, Prince Jackson, and Blanet Jackson to wear face masks while they were out in public with him.

The masks ranged from Burka-like fabrics to more Mardi Gras-style masks, and many people found them to be weird, including now 13-year-old Paris Jackson herself!

Back in December, Paris told Ellen Degeneres that she thought wearing a mask as a kid was “stupid,” and she has elaborated further in a new interview with Oprah. Read More: Paris Jackson Reveals True Feelings To Oprah About Michael Jackson’s Death

“I didn’t get why I was wearing a mask,” she said, admitting that it was “really confusing” at the time, reports E! Online. “But I understand it now – why my dad would want our faces to be covered. When we went out without him we wouldn’t be recognized.“

Paris also insisted that Michael was a “really normal” father, despite all of the weird rumors that he wouldn’t allow his children to look into mirrors or have a toy for more than a day.

“Now I see other kids and their parents and I compare them to my dad. Our dad was a really normal father when he was with us. We would get grounded if we did something bad. He would ground us. He wouldn’t call it grounding; he’d just say, ‘You’re on punishment.’ Sometimes we’d be on punishment a lot. Mostly me and Blanket, because me and Blanket would always fight,” Paris said.

Paris certainly seems like a well-adjusted and articulate young adult now, but we can’t help but wonder if those early-years of mask-wearing will come back to haunt her at some point during her life, possibly in the form of “maskophobia.”