Emily Maynard Warned Not To Choose Arie Luyendyk Jr. As The Bachelorette 2012 Winner 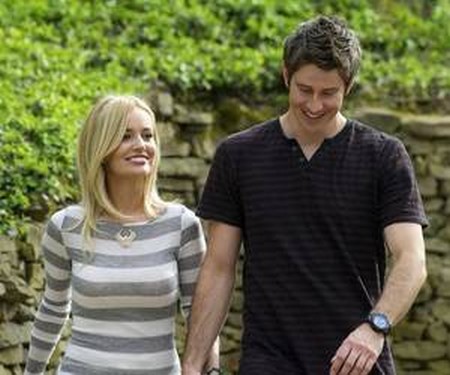 Emily Maynard has been warned by Arie Luyendyk Jr.’s ex-girlfriend, Cassie Harshman, not to choose her ex as the winner of The Bachelorette 2012. Cassie alleges that Arie is a womanizing playboy who is just using Emily and the TV show to boost his fame. Cassie’s disgust with Arie was cemented when she earned that he ruthlessly sold her out by revealing to Emily a tragic secret they shared.

According to RadarOnline Cassie told Star Magazine all sorts of unpleasant details about Arie including: “He’s in it for the fame,” and that “Arie has dated hundreds of women and travels all over the world.”  Given what we know about Emily, who is also totally invested in becoming a big star, these two sound perfectly matched!  Let’s be serious – Emily Maynard is all about the fame and fortune and not about the romance.

She even scoffed at the idea that Arie was looking for love – “Clearly, he doesn’t need help finding a date or someone to fall in love with,” she said, following up with: “The whole idea of Arie being on The Bachelorette is a joke. He hasn’t raced much since 2008, and I know with certainty that his only motive for going on the show was for the fame and attention.”

While putting down her ex, whom she dated from dated 2009 until 2011, and lived with along with her two small children from a previous relationship, Cassie also took the opportunity to knock Arie’s parenting: “He wasn’t the best father figure to my children” – “Let’s just say that Arie has some growing up to do himself.”

As far as the betrayal mentioned above, it seems that Arie told Emily all about the miscarriage Cassie suffered while pregnant with Arie’s child: “What happened is one of the hardest things a woman can go through. I’ve moved on, but Arie using that to try and elicit sympathy from Emily is horrible.”  The scene was eventually cut from the TV show.

So there you have it.  Arie is not the marrying kind according to someone who should know.  Will Emily be sharp enough to see through Arie?  Is Arie actually all that bad?  After all, we are learning this from a disgruntled ex-lover.  Besides – we know that Emily chooses Jef Holm!