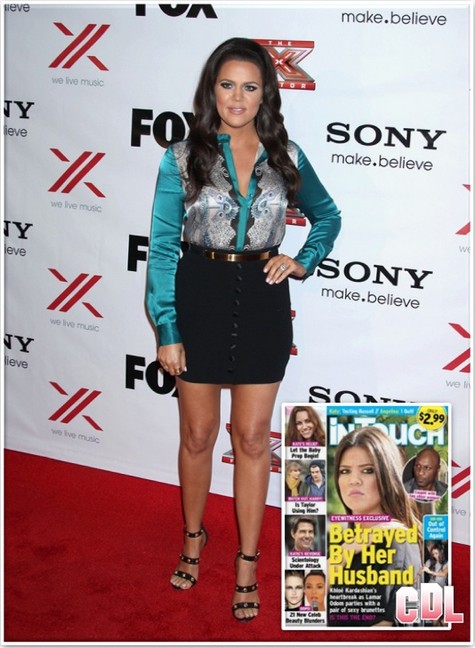 Things aren’t looking so hot for Khloe Kardashian and Lamar Odom. We’ve heard almost since day one that this couples’ three-year marriage was strained. The biggest problem has appeared to be Khloe’s desire to start a family and the fact that at least some level of infertility seems to be plaguing the couple. Then there’s Lamar’s job. He has been transferred a few times and the current LA Clippers forward seems to play as well as his personal life is going.

Khloe recently landed The X Factor hosting gig and it was a career move that some hoped would help the couple. Maybe if Khloe stopped focusing so much on babies then the tension would decrease and the couple would be more solid. Instead of using this as an opportunity to encourage his wife to focus a bit on work Lamar seems to be pretty MIA in general. Well, at least he is missing from his wife’s life, but he is popping up elsewhere with a string of ladies! According to the latest issue of In Touch Weekly he was flat out busted while away for LA’s game with the Oklahoma City Thunder! Says an onlooker at a Skybar, where Lamar partied into the wee hours of the morning, he appeared to be leaving with two women.

“He went out the back door, and it looked like he was about to leave, they were standing next to a cab. Both of the women were very thin brunettes in their late twenties, and when I saw them, I immediately wondered, ‘Why is Lamar in an alley in the middle of the night with two gorgeous girls?’”

Has the stress at home gotten so bad between Khloe and Lamar that he’s now seeking comfort in the arms of other women? Would he betray her like that? It’s not the first time in recent weeks that Lamar has been spotted a little too close for comfort with other women. Tell us your thoughts in the comments below!