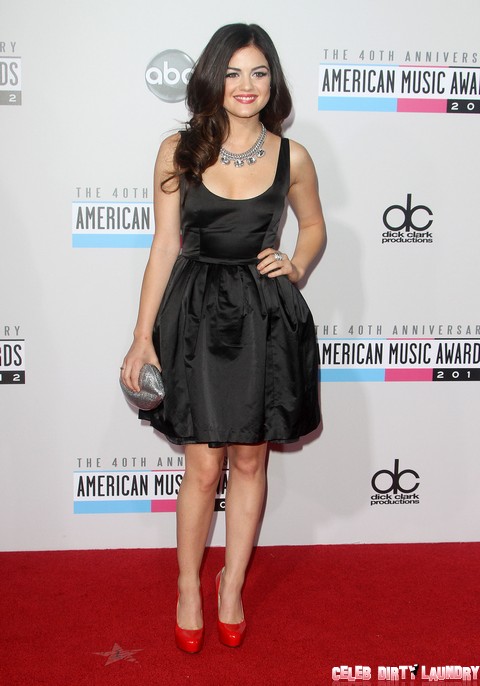 As we cruise on into 2013 casting rumors are heating up over the much anticipated film adaptation of Fifty Shades of Grey.  Hands down Ian Somerhalder is leading every poll out there as absolute fan favorite for being cast in the role of Christian Grey.  The Vampire Diaries star also shot a series of short films recently that prove the actor most definitely can pull off the role of the sharply dressed, cut throat businessman with a penchant for whips and chains.

His real life love, Nina Dobrev also seems to think that her man would be absolutely perfect for the role, but she is none too happy with one of his potential costars. The role of Anastasia Steele is as pivotal as Mr. Grey and she needs to be portrayed by a young actress that can blur the lines between innocent and hardcore bad girl. A new name has surfaced amongst fans and they could be right, Lucy Hale might just BE Ana. The actress has heated up the screen in cult classic hit show, Pretty Little Liars for the last few seasons and she, no doubt is ready to prove that she can take on a very adult role.

The big problem for Nina? She knows that Lucy is exactly the type of girl that Ian goes for. She’s thin, dark haired, stunning and smart. She and Ian seem to be very tight for now and really seem to enjoy their time together but who can blame Nina for not wanting her man to get down and dirty with Lucy on a film set? Fifty Shades revolves around sex and the whole S&M culture, whomever stars is signing on for months of physicality with their costar so it’s no wonder Nina doesn’t want Lucy snagging the coveted role!

Could you see Ian and Lucy having the kind of chemistry that would spill over into real life? Tell us your thoughts in the comments below!