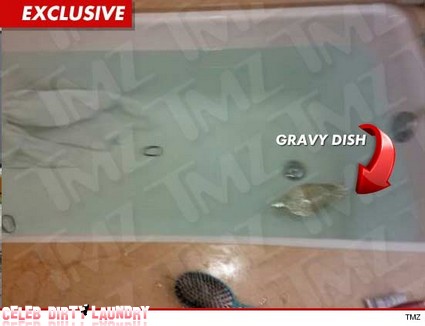 We’ve seen pictures of the bed where Michael Jackson died. Now comes the bathtub where Whitney Houston passed away on the weekend. TMZ has obtained this exclusive picture of where it all came to an end for the 48 year old troubled diva.

The photo was taken just after the LAPD and Emergency crews removed her body from the bathroom of her suite on the fourth floor of the Beverly Hilton hotel on Saturday afternoon. It’s a chilling shot given the superstar was lying here lifeless just minutes before.

If you look carefully you can see the tub is still filled with water. There are also two hair ties in there and a gravy dish, Apparently Whitney would fill the dish with olive oil as part of her daily beauty routine in an effort to keep her skin soft. You can also make out a towel and hair brush.

Meantime deciding on Whitney’s final resting place has seen the family almost come to blows. On one side there’s Whit’s Mother Cissy Houston and Aunt Dionne Warwick. They wanted her burial to take place in Atlanta. They reckon that’s where the Bodyguard star had the fondest memories. On the other side of the ring… the rest of Whitney’s family pushing for her to be laid to rest in Newark, New Jersey where she was born. Cissy was adamant ‘Michael Jackson did not want to be buried in New Jersey, and Whitney did not want to be buried in New Jersey’ But the rest of the family won.

The funeral is scheduled for Friday.