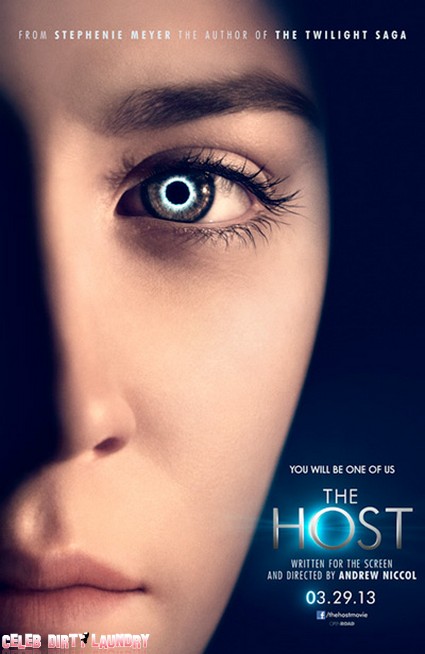 There’s no Robert Pattinson. There’s no Kristen Stewart. There’s no Taylor Lautner. But this is one highly anticipated movie. It’s called The Host and is based on another best seller from Stephenie Meyer. You might have heard of Steph – she wrote the Twilight series. They made them into movies and they did quite well.

It stars Saoirse Ronan, Max Irons, Jake Abel, Diane Kruger, William Hurt and Frances Fisher. Could Saoirse be the next K-Stew? Can Max give R-Patz a run for his money? It won’t hit the big screen until March 29 next year. So what’s it all about? In The Host the vampires have been replaced by Aliens. It’s more sci-fi than bloodthirsty.

According to Comingsoon.net ‘The Host is a riveting story about the survival of love and the human spirit in a time of war. Our world has been invaded by an unseen enemy. Humans become hosts for these invaders, their minds taken over while their bodies remain intact. Most of humanity has succumbed.’ Sounds good – just a pity the poster isn’t a bit more enticing.

But let’s not get too ahead of ourselves. There’s still another Twilight film to come. Breaking Dawn Part Two will be out this November. And it’s tipped to be the biggest of the franchise. It’s going to be very hard for Miss Meyer to repeat the success of the big screen Twilight but maybe we’ll be ready for something completely new by then. In 2013 vampires might be so 2012.