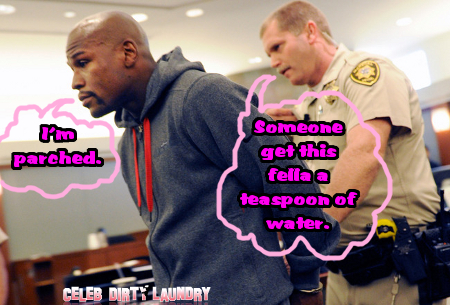 Floyd Mayweather, who was sentenced to three months of jail time after being involved in a domestic violence dispute, is spending his days crying like a big baby in jail!

He asked the judge to let him go home on house arrest because he’s dehydrated and malnourished. The judge told Mayweather that there — despite popular belief — is actually water available to prisoners at all hours of the day — and that he, ultimately, is the one who’s choosing not to eat or drink. Yep, what a cry baby! The boxer also said that his boxing career is at risk and these horrible conditions are taking a toll on his body.

The judge told Mayweather that he’s causing his own horrible conditions. Wow, suck it up! You only have 3 months in there. Make some friends and get over yourself!

The boxer claimed he’s withering away in jail and really wanted the judge to take pity on him and be empathetic towards the boxer’s struggle in jail.

All the Nevada judge did was K.O. the plea, reject the pampered boxer, and order him to serve out the rest of the sentence in its entirety. Funny how the boxer can go toe-to-toe with some of the “toughest” guys in the world and now he’s crying like a little baby . . . over food and water? I mean, those things are important (they’re sort of essential), but it’s not like prisons don’t provide adequate sustenance. Was he honestly expecting the food quality to be comparable to a Michelin star restaurant?

Mayweather must have thought staying in jail for three months would be like a vacation at a resort. Maybe he will learn his lesson and not get into anymore trouble again.

The boxer also complained that he didn’t have enough time or space to work out and train. By now, I’m sure the judges wanted to laugh and tell Mayweather to suck it up! The judge told him that “there’s plenty of time and room for you to train. Although it’s not the type place you’re used to training at, you will make due.” I guess Mayweather needs some tissues to wipe up all those tears — and maybe a pacifier to keep those rambling lips occupied.