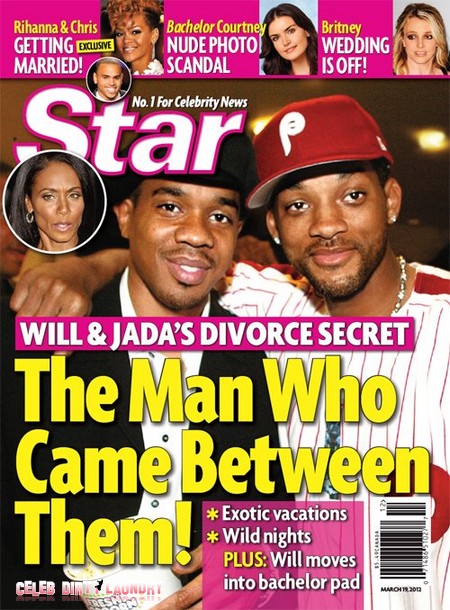 The March 19th issue of Star Mag features a cover suggesting that Will Smith’s secret gay lover, Duane Martin, is the cause of his impending divorce with Jada Pinkett Smith!  Who would have thought that Will was bi-sexual?  We can’t wait to learn all the details surrounding this mess – but we do feel sorry for his children.  Divorce is always rough on kids and perhaps even more so when they learn about their dad’s bromance with Duane.  No wonder Willow Smith shaved her head.  This is not the first time that both Will and Duane Will have been accused of being gay – but does Star have proof this time?

Last year Will was accused of partying with a mystery blond in Florida and his marriage with Jada seemed about to end.  Jada was also thought to have been jazzing it up with Marc Anthony behind Will’s back.  Perhaps Will and Jada just have a good old-fashioned OPEN marriage?

Hollywood Life blasts out some shocking details: Rumors of an impending divorce between Will and Jada are rampant, and a new report suggests it’s because Will is on the ‘down low.’ Find out about the man who’s come between them!

Will Smith, 43, and Jada Pinkett Smith, 40, have been long known as a grounded Hollywood couple, so when word spread that there was trouble between the A-listers, everyone began speculating what could’ve gone wrong. Answer: Will’s “bromance” with actor Duane Martin, suggests Star.

“Will spends significantly more time with Duane than he does with Jada and the kids,” a source tells the mag. “And as time goes by, Jada is growing more upset about it.”

In fact, Will and Duane have been inseparable. They’ve been spotted together multiple times wining and dining and even going on a private cruise in Trinidad, at restaurants and art openings in Miami, and a trade show in Las Vegas — just in the past four months.

“Will and Duane definitely looked very close,” says a source, who spotted them at Flair restaurant in Trinidad on Feb. 24. And although they were with company, “it was clear Will and Duane both arrived and left together,” the source added.

Duane, who’s married to Tisha Campbell-Martin and has two kids, played the lead role in Will’s executive produced sitcom All of Us. He’s previously been accused of being gay but has dismissed the allegations.

Regardless, it seems Will’s time spent with his BFF is causing a rift with his family. And whether Duane had anything to do with it, Will has reportedly moved into a lavish bachelor pad in Villanova, Pa.

Jada “can’t stand Will’s relationship with Duane. She feels like Will flaunts it in her face, hanging out with him every day and taking him on exotic vacations while she’s sitting home alone,” says a source.

Do you think that Will and Duane are getting down and dirty together?  Let us know in the comments below.