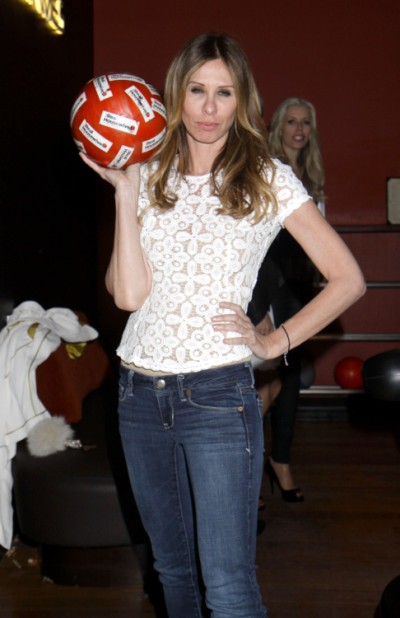 Did any of you throw out a “What the?” when Sonja Morgan let it slip that George Clooney dated Carole Radziwill during this week’s episode? Well, she didn’t actually say date. Her exact words were, “Look at the ass on Carole… No wonder Clooney did her for a year.” So when was this infamous year and why are we only finding out about it now!

Unfortunately I don’t think we’ll get too much information from Carole. After the episode aired on Monday night, Carole tweeted, “I don’t kiss and tell but if I did tell I’d say Clooney was a very good kisser . . . But I”m not saying……just saying.”

Way to go Carole! Is Stacy Keibler or any of the other mildly attractive, verbally-challenged Oscar-dates Clooney romances a step up from a Housewife? Ordinarily, I would give a resounding yes but not when it comes to Carole. I actually thought I would hate Carole when she first entered the show this year. She’s too smart. Too cool. Too damn skinny and too normal in an “I married a prince and my best friends were Carolyn Bessette-Kennedy and John F. Kennedy, Jr.“ sort of way. When I lay it out on the table like this Carole almost seems too good for George! I’ve grown to love her! She lets the crazy surround her and doesn’t break a sweat. It’s actually fun to have a seemingly rational person around all those nut jobs because then you really get to see how nutty they all are! Crazy around crazy is normal. Throw a sane person in the ring and you’ve got a circus.

But we still don’t know when the hook-up went down. The 48-year-old author’s husband died in 1999 after the couple had been married for five years. George was just getting his leading man status going at that time. He wasn’t Danny Ocean yet by any means and his love life was still a little under the radar. It must have come sometime after Carole’s husband died and it must have been a proper relationship since Clooney’s girlfriends usually stick around for a couple years. Carole apparently only had one with Gorgeous George. She probably got tired of his b-llshit back and forth. I don’t think he had his place at Lake Como at the time so there wasn’t as much incentive to play along with the fact that he was never going to settle down.

Too bad Clooney doesn’t ditch Keibler for Carole now. She’s a catch! Her hot body would look amazing as arm candy on the red carpets! Unfortunately, I just think her IQ may be a little high for George! And let’s face it, at 48 she’s just too damn old!

Are you surprised Clooney and Real Housewives of New York City star Carole hooked up way back when? Do you think he’s kicking himself in the ass now?