GLOBE: Inside The Jackson Family’s House Of Horrors (Photo) 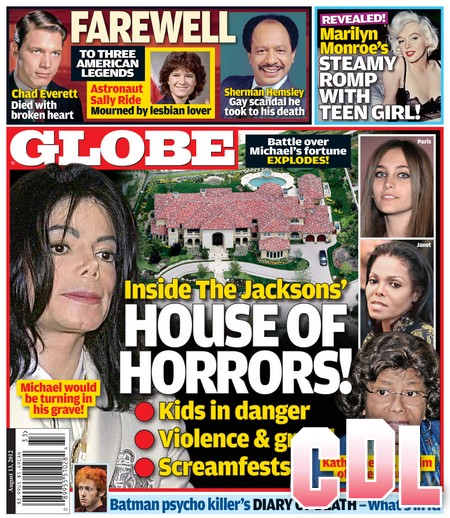 Everyone knows that life for the members of the Jackson family has been a disputatious mess lately.  And we know this because much of this ugliness has spilled over into the media. Of course Paris Jackson’s tweeting as well as Prince Michael’s has certainly helped. Grandma Katherine Jackson’s kidnapping by some of her greedy-rat children made headlines.  Some of Katherine’s children want her to be able to divert more money to them from Michael Jackson’s Estate – but that is illegal.  So they tried to strong-arm their mama into attempting to ditch MJ’s estate executors because they won’t cooperate with the scam.   Almost all of Michael’s siblings have gotten into the act, with Janet, Randy, Jermaine being the noisiest – even cousin TJ, figures prominently in the mess.  Gladys Knight also had to kick in her 2 cents worth.

The windup was that lawyers for MJ’s kids stepped in and had a judge remove Katherine as guardian, placing cousin TJ temporarily in charge of kids.  I mean it’s understandable for grandma to want to slide her own kids money that rightly belongs to the estate, but that is not what a guardian is supposed to be doing.   Now that GLOBE is on the case we will learn the truth. The cover of the current issue of GLOBE promises to reveal shocking details of what went on in the Jackson compound!  Apparently MJ’s kids were in danger – and from what we know, that is 100% true.  The violence and greed displayed by some of MJ’s family resulted in shocking screamfests as the battle over Michael’s fortune exploded!

As GLOBE aptly states: ‘Michael would be turning in his grave.’  GLOBE also explores a critical question in all of this family mayhem– is Katherine a victim of elder abuse or is she complicit in the attempt to scam and skim off the grandkid’s inheritance?

This week’s GLOBE also exposes what is in the Batman Killer’s Diary of Death.  I’m afraid to know!

Also in this week’s edition of the GLOBE is a Farewell To Three American Legends – Chad Everett who died with a broken heart; Sally Ride mourned by her gay lover; Sherman Hemsley who supposedly took secrets of a gay scandal to his death.

As if that isn’t enough hot reading, GLOBE tells the formerly hidden story of Marilyn Monroe’s  steamy romp with a teen girl!

This week’s GLOBE is a must read!  The entire Jackson family battle and its consequences are still confusing – with all of the details and motives having been poorly explained until now.  But I know that once I read the GLOBE’s lucid and lively explanation of the Jackson family feud I will fully understand this important story.  Once GLOBE reports on a topic I know I can read it and walk away feeling like an expert!