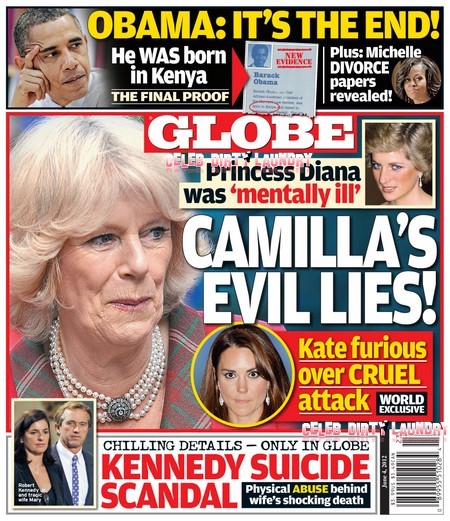 Kate Middleton loves her husband, Prince William, and therefore the Duchess gets very upset when anyone attacks his late mom, Princess Diana.  Camilla Parker Bowles, who followed Diana as Prince Charles’ second wife, has come out with an outrageous assault on Diana – calling the late Princess ‘mentally ill’ and much worse.

This week’s edition of GLOBE has a world exclusive as the cover story presents an expose on ‘Camilla’s Evil Lies.’  Camilla can’t leave well enough alone and insists on ridiculing Princess Diana for her mental health issues even though she was largely to blame for destroying Charles and Diana’s marriage.  Camilla is bitter and disgruntled because she knows she will never be Queen.  Prince William is second in line for throne but the smart money says that Charles will be passed over in favor of his far more popular and respectable son.  Kate will get what Camilla has schemed for unsuccessfully!

Furthermore, as we reported right here on CDL via GLOBE recently, Camilla’s behavior is totally crazy these days, with Charles actively trying to have her committed to a mental asylum.  On a recent royal visit with Prince Charles to Denmark the Duchess of Cornwall lost her marbles and actually pulled out a stunt gun and terrified her royal hosts.  GLOBE gets the insider details on the royal situation and allows us to learn the truth.

GLOBE also presents exclusive chilling details on the tragic Mary Kennedy suicide.  There is a horrible scandal brewing as GLOBE reveals the shocking details of the physical abuse behind the suicide of Robert Kennedy’s wife.  Not a pretty situation at all.

This week’s GLOBE promises to make amazing and informative reading.  GLOBE goes right to the heart of matters and never stints on letting us know the truth.  When I want to know what is really going on behind the scenes and learn the facts that others are afraid to reveal I go to GLOBE!  I’ll be first in line at the newsstand getting my copy of GLOBE.