GLOBE: Princess Diana And Angelina Jolie Would Have Been Best Pals 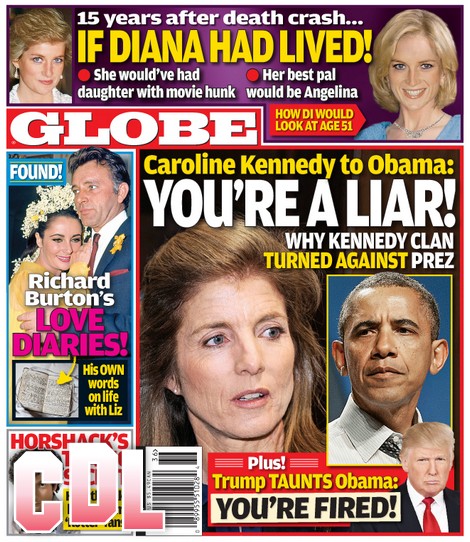 This week’s GLOBE asks the question: what would Princess Diana’s life have been like had she survived the car crash that killed her 15 years ago?  Princess Diana died tragically on August 31st 1997 when her limousine crashed while being pursued by greedy and aggressive paparazzi.  Diana’s boyfriend, Dodi Fayed, and their diver and bodyguard, Henri Paul, also died in the accident.  Conspiracy theories abound claiming that senior royals where behind a plot to eliminate Diana.

Angelina Jolie and Princess Diana would have been best of friends according to GLOBE.  We can easily see their friendship blossoming since Angelina loves royalty and prefers the company of older woman.  Angie hates competition and the age difference between Diana and herself would have been just right – Diana would be 51 years-old now.    Do you think Angelina would have encouraged Diana to try her hand at acting?

GLOBE postulates that Diana would have ended up marrying a movie hunk with whom she would have had a daughter.  Why a daughter and not a son – I guess GLOBE figures the odds would be in favor of a girl after Diana already had two boys, Prince William and Prince Harry.  Hopefully the daughter would have been more discreet than Harry.  And who do you imagine Diana’s Hollywood stud would have been?  We’ll have to read the GLOBE Print Edition this week to find out!

The GLOBE cover also reveals that Richard Burton’s love diaries have been discovered!  In the Print Edition we will learn what Richard had to say about the love of his life, Elizabeth Taylor, in his own words.

This week’s GLOBE has details on the tragic secret that Ron Palillo – Welcome Back Kotter’s Horshak – kept from his fans.

GLOBE also explores the ongoing battle between President Obama and Donald Trump with the Kennedy Clan in the mix as well!  I can only imagine what these powerful people have to say to one another.  The GLOBE cover hints at the nature of the discourse as a caption has Trump saying to Obama ‘You’re Fired!’

Where else can you find such a range of wonderful reporting?  With stories ranging from Princess Diana’s life as it would have been had she lived, to Richard Burton’s secret love diary, GLOBE never disappoints.   This week’s edition of GLOBE is begging to be read by everyone who wants to know the inside scoop.  I’ll be buying my copy really soon.

To subscibe to GLOBE and have the magazine delivered right to your door go HERE!