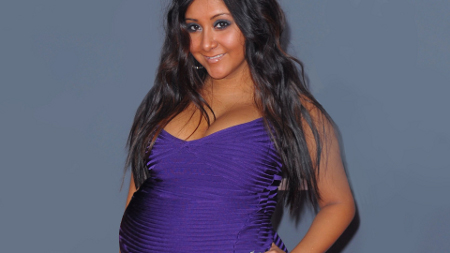 For those of you who aren’t following the life and style of one of our favorite guidos, Snooki, you might be excited to hear that she’s just told the world what she’ll be naming her new baby boy! Snooki and her fiance Jionni LaVelle have decided to go with the extremely Italian name of Lorenzo. Snooki’s baby’s name Lorenzo? What were you expecting her to name him? Watermelon?

The news, according to E!, was leaked earlier today after by her Jersey Shore castmates. They let the incredibly sensitive secret slip during an interview with USA Today. Woops. How many fist pumps do we get for this minor goof up?

Our girl Snooki probably doesn’t mind in the least bit that her babe’s name has gotten out there, as she thoroughly enjoys her time in the spotlight — during which she glows bright orange, the color of a happy, joyous, soon-to-be-guido-mother.

Snooki is due to give month this coming September (hey, maybe her baby and me will share the same birthday), and already she’s had a baby shower. Hey, any excuse to party, right? Despite Snooki’s partying ways, we’re pretty sure she’s not drinking alcohol or doing anything that might harm the baby. She might be crazy — hell, she might be borderline insane — but that little voice inside me (the one I use to monitor these crazies in the celeb world) thinks she’ll make a fine mother.

What do you think? What kind of parents do you think Snooki and Jionni will make? How many years before Lorenzo forms his own hit reality show?