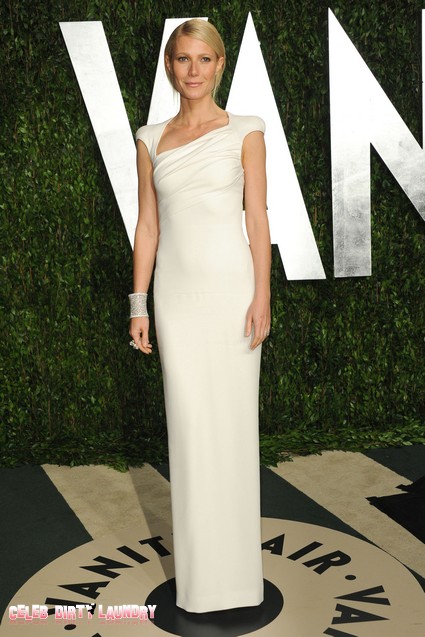 Gwyneth Paltrow was busy sucking up to Beyonce Knowles and Jay-Z as she showered praise all over Blue Ivy Carter. Paltrow says that she thinks Beyonce and Jay-Z’s daughter, The Notorious B.I.C., is destined for great stardom. Since Blue Ivy made her debut performance, which was being born, her excessively commercially-oriented parents have been promoting her, copyrighting her name, using her ‘voice’ on a Jay-Z track, etc. – in short they have turned Blue Ivy into a franchise. Gross, isn’t it?

I mean enough is enough with this kid – and anyone who is coherent, or at least awake, has to be nauseated at this point by Beyonce and Jay-Z thrusting Blue Ivy into the public eye. Even Blue Ivy’s grandparents have had enough. We thought ‘Toddlers And Tiaras’ was exploitive but the Blue Ivy push makes that show look like ‘Sesame Street.’

Previously the Chicago Sun-Times reported:  “A close associate of the Knowles says that the grandparents want Beyonce and Jay-Z to ‘back off a bit and pull back on the publicity they are helping generate for that child.'”

The 39-year-old Paltrow has a daughter Apple, seven, and a five-year-old son Moses with her spouse Chris Martin but she believes Blue Ivy Carter is going to be an “entertainer” in the future because the two-month-old baby has a “glow around her” like her ‘Single Ladies’ hitmaker parent.

Paltrow spoke to Hollywood Life saying:  “She is going to be an entertainer.  She just has this glow around her like her mother.”

As well as seeing a lot of potential in B.I.C., Paltrow thinks first-time parents Beyonce and Jay – whose real name is Shawn Carter – are doing a “great” job raising their little one.

Platrow added:  “Beyonce is doing great.  She’s just a natural at being a mom.  And Blue Ivy is stunning, she has the most beautiful eyes.”

Earlier this month a generous Paltrow treated Beyonce and Jay by spending out $1,000 on a stroller for Blue Ivy by Bugaboo – which happens to be the namesake of a hit single Beyonce had with girl band Destiny’s Child in 1999.

An insider said:  “It only makes sense for Beyonce to have this ultrachic stroller. Blue has the hottest ride!”

Can Blue Ivy possibly live up to all the hype? Are Beyonce and Jay-Z setting up their daughter for failure? What do you think? Let us know in the comments below.