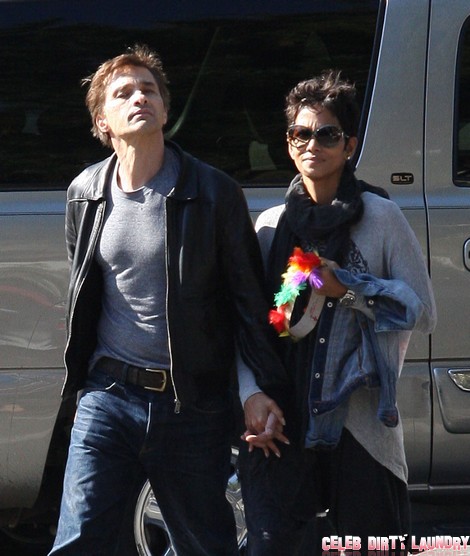 We’ve reported here on Celeb Dirty Laundry during the past 24 hours that Olivier Martinez is to blame for the brawl between him and Gabriel Aubry at Halle Berry’s house yesterday. Now, according to a latest report, security cameras allegedly captured much of the action between the dueling Frenchmen. The video has, at the time of writing this, not yet been turned over for evidence to the LAPD, but according to the report, “Gabriel Aubry is anxious for that to happen fast.”

As we previously reported, Aubry was dropping off Nahla, the ex-couple’s four-year-old daughter, at her house on Thanksgiving after the little one spent the night at her male model dad’s home. Aubry and Martinez became locked in a stand-off and attacked one another. Aubry’s rib was broken and Martinez’s hand was busted. Eventually, after the throw down, Aubry was booked at the police station for misdemeanor battery, but was later released when he posted bond. We do not think Aubry was the instigator of the fight, although Berry’s camp has since said otherwise. The security camera footage would only substantiate our theory that Martinez was the one who threw the initial punch and subsequently busted his hand.

We theorize that after Berry and Martinez’s ploy to take Nahla away from Aubry failed, they instigated a Jerry Springer throw down in order to secure their stance in the courts. Aubry would obviously never initiate such a fight in front of his daughter, let alone cause an all out brawl at his ex-partner’s house.  We’re one hundred percent certain that once the security footage is released, the truth will come out and that conniving Berry bitch and her cohorts will pay for their injustices. Karma’s a bitch, so you better run Berry!

According to RadarOnline, “Before the evening was over, Halle and Olivier were seen going to a friend’s home where it is believed they spent the night with Nahla.” See? They’re already running.