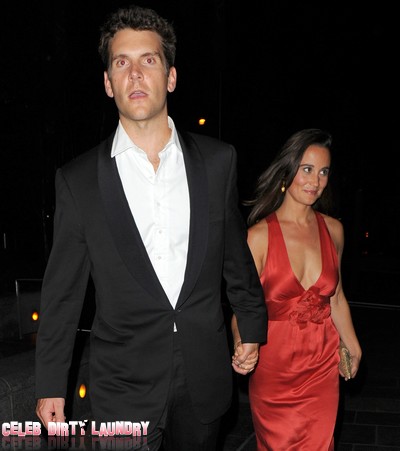 Alex Loudon’s parents still aren’t too impressed with Kate Middleton’s sister and think Pippa Middleton isn’t good enough for their blue-blooded former superstar cricketer turned stockbroker. The couple are trying to make it work again after splitting up last year but Alex’s family hope this go around ends up much like the last.

“They don’t think Pippa’s right for him as she parties too much,” a source told Now magazine.

Yes, because Alex being the potential uncle of the future king/queen of England is just too lowbrow for these people. For crying out loud, even Henry IV, when contemplating changing religions so he could be King of France said, “Paris was worth a mass.” Why can’t the Loudon’s come around to the fact that a close relation to the royal family is worth a Partyin’ Pippa? What are they thinking? Why can’t they ackowledge that Pippa actually elevates their position? Could these people be so secure and happy in their lives that they don’t want to social climb? The nerve!

Allegedly, Alex and Pippa broke up before because he couldn’t take her (and her shapely bum’s) rapid rise to fame. Perhaps the Loudons know this leap in social position would only make their son’s life uncomfortable. Blurg, get over it already! Stop taking her back if you don’t want to be in the spotlight!

But this is so mind-boggling to me. What is so wrong with Pippa? Why are blue-blooded families so hesitant to add her into the fold? She’s the sister-in-law to the future King of England! The Middletons have their own coat of arms now – sure it has acorns on it – but that’s OK. I just don’t understand! Now, granted, as I’ve said before, there is the little rumor that Pippa’s been passed around more times than a joint at a Bob Marley concert within the upper crusts and she has had a somewhat questionable start this year as a member in the extended royal family. But these people should ease up! If the Queen will allow Pippa to take her place in the royal box at Wimbledon than the Loudon’s should deign to let her come around for dinner.

I feel for Pippa on this one. Now reports that she’s told friends Alex is “the love of her life” and she’s committed to making it work. She’s obviously in friendship repairing mode because she’s actually complying with Kate’s ridiculous demands to keep the royal family happy as well. If, Pippa’s willing to put in the effort than the Loudon family should do the same. Alex looks like he needs a Pippa in his life, don’t you think? Someone to mess up his hair and unhinge his perfectly knotted and super tight tie. Why not Princess Pippa?