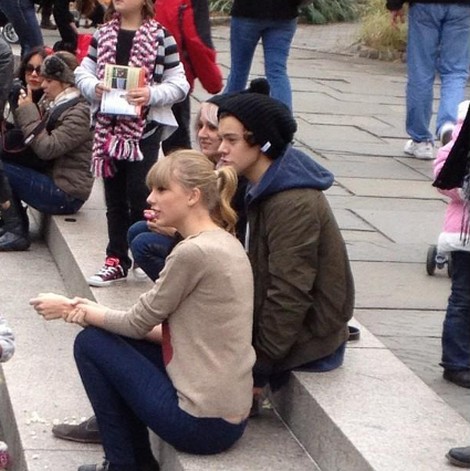 Taylor Swift sure doesn’t mess around when it comes to dating the fella’s.  Fresh off her break up from Connor Kennedy, T-Swift is rumored to be dating Harry Styles, of the boy band One Direction.  While the two have yet to confirm their relationship status, the pictures that surfaced earlier today only further cement the fact that these two are more than ‘just friends’.

The two appeared to be taking quite the romantic stroll today in New York City’s Central Park, despite keeping their hands to themselves.  Harry is said to have invited Taylor to join him for One Direction’s performance in the city tomorrow night, and Taylor clearly didn’t say no.

Taylor, 22, split from Connor, 18, and fans were shocked by the abrupt decision to part ways as the two seemed so happy together.  It didn’t take Taylor long to bounce back, straight into Harry’s arms.  On the other hand, there are those skeptics out there who believe that Taylor is just out to make Connor jealous.

Whether she is falling for Harry or not, Taylor has always been honest about the inability to take things slow when it comes to love.

“I don’t think there’s an option for me to fall in love slowly, or at medium speed,’ she said in the interview. ‘I either do or I don’t.”

“I don’t think it through, really, which is a good thing and a bad thing. You don’t look before you leap, which is like, ‘Yay, this is awesome! Let’s not think twice!’’ And then you’re like, ‘we used to be flying. Now we’re falling. What’s happening?’”

Oh to be 22 all over again…well Taylor certainly hasn’t wasted any time in her hopes of finding ‘the one’.  With her long list of Hollywood exes, she’s well on her way!  But the question remains, is it going to be Harry?