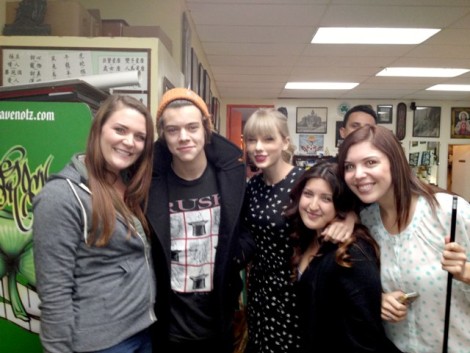 I honestly have no idea what’s going on. This is all a little too much! Let’s start from the beginning. Taylor Swift and Harry Styles have taken their love on the road and are back in Los Angeles after holding hands all over Britain. How do we know this? Harry was spotted yesterday at the Shamrock Social Club tattoo parlor yesterday. Harry got inked again. No big deal, he’s apparently got like 20.

Naturally we thought he would get an “I love Taylor” stain but were pretty bummed when he came away with a ship UNTIL we took a closer look.

Check out these pics. Doesn’t the ship look an awful lot like the ship on Reeve Carney in Taylor Swift’s newest video “I knew you were trouble”? I can’t tell if they’re the exact same but it’s pretty damn close.

So what’s going on??? Did Taylor encourage Harry to get the  tattoo because she’s really into ships right now? You have to assume she designed the whole idea for her music video. It has just enough bubble gum pathos to be a Taylor idea. So she put the fake tattoo on Reeve and then liked it so much she told Harry to get one as well. How else can you explain the similarities?

And also, I’m confused! You know I think this whole relationship is just a wink and a nod between managers. Why would Harry give up all that pale, skinny real estate for an idea from a fake girlfriend? Is Taylor that persuasive or did Harry just watch the video with her and think the whole thing is pretty cool? Is life imitating art or is art imitating life? That’s the question with Taylor Swift and, unfortunately, I don’t even think she knows the answer.

What do you think of Harry Styles’ tattoo? Is the Reeve Carney music video just too weird to you? Also, is this proof the couple is legit?