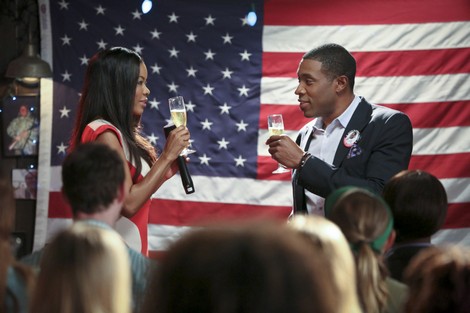 HART OF DIXIE  is really starting to amp up the romance and sexual tension – it’s practically steamy down in Bluebell! On this week’s episode, I loved that Wade was getting jealous over George and wasn’t even tempted by the women throwing themselves at him at the Rammer Jammer Halloween party. You can tell he’s really falling for Zoe – or maybe has already fallen.  Did you watch last week’s episode?  We did and we recapped it here for you!

Unfortunately, as Zoe revealed to George when counseling him about his somnambulism – she’s involved, but it’s not serious. Sorry Dr. Zoe – seems like it’s serious to Wade. Meanwhile, I’m glad the Annabeth, Lemon, Lavon love triangle played out quickly since no one but Lemon knew it was a thing anyway.

Spoiler alert: If you’re one of those people who doesn’t like spoilers, stop reading now! We have some juicy spoilers for you about the season 2 episode 6 of CW’s “Hart of Dixie.”

Unfortunately, Hart of Dixie is not on next week because of the election – but I’m more interested in the Bluebell mayoral race anyway!

Official CW synopsis of “I Walk The Line“: VOTING DAY / KELEN COLEMAN (“NEWSROOM”) GUEST STARS — With the upcoming Mayoral election looming, Lavon (Cress Williams) and Ruby (guest star Golden Brooks) continue to be tied in the polls, leaving Lemon (Jaime King) no choice but to use some creative methods to win. Elsewhere, George (Scott Porter) and Wade (Wilson Bethel) are also tasked with trying to secure some last-minute votes, but run into a problem when Wade’s ex-wife Tansy (guest star Mircea Monroe) refuses to cooperate with their scheme. Meanwhile, Zoe (Rachel Bilson) and Magnolia (guest star Claudia Lee) grow concerned when they notice that Brick (Tim Matheson) has been unusually grouchy and Zoe tries to help by offering to give Magnolia driving lessons. Tim Matheson directed the episode written by Donald Todd.

But returning in two weeks, episode 6 of Hart of Dixie picks up with Bluebell’s mayoral election. The race looks like it will be dog eat dog right up until the end as Mayor Lavon Hayes squares off against his hottie high school ex Ruby in a fight to the… well not death, but to the polling place anyway.

And while the race is heating up, it looks like something may be rekindling between Lavon and Ruby. I bet Lemon’s not going to like that since she just had to pry Annabeth away from Lavon’s oh-so-broad shoulders!

Meanwhile it looks like George has found that serious relationship Zoe thinks she wants him to have. Newcomer Presley has caught his eye and she’s refreshingly different from both Lemon and Zoe. The doctor should be careful that she doesn’t lose George to Presley for good.

In the next episode, “I Walk the Line,” we’ll see who wins the election and who wins George’s heart! You’ll never believe how the voting goes! Be prepared for lots of sexual chemistry, a little romance and of course – hunky Wade without his shirt.

Hart of Dixie airs Tuesdays on the CW at 8 p.m. Tune in to watch and leave us a comment with your prediction for who Zoe will fall for – George vs. Wade – and who Lavon will hook up with – Lemon vs. Annabeth vs. Ruby! And to tide you over until the next episode of Hart of Dixie, you can watch the preview of “I Walk the Line” below. Enjoy!