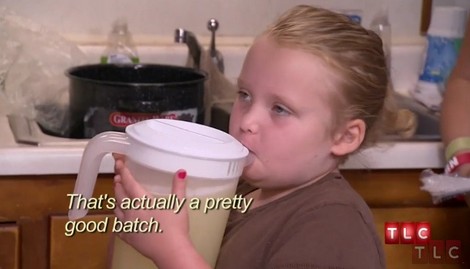 Tonight an all new episode of Here Comes Honey Boo Boo airs on TLC.  On tonight’s episode is called “Time for Sketti!” Honey Boo Boo “Alana” sets up a lemonade stand to raise money for her new pageant.  If you missed last week’s episode called “Shh! It’s A Wig”  we have a full and detailed recap here!

On last week’s show it was Fourth of July week and the family enjoyed a picnic and fireworks. Sugar Bear surprised everyone with a new pool, but putting it together was a challenge in the heat. June searched for a new hairpiece that could help Alana win at the big pageant.  Then the family heads to a restaurant house  to have Bar-B-Q because Sugar Bear wanted everyone to have a sit down meal.

On tonight’s show with summer drawing to a close and the girls getting bored, June thinks of creative ways to keep them all entertained. Then, to raise money for her pageant, Alana sets up a lemonade stand. June also lets us know how she affords to send her four kids to pageants.   Her secret is – she budgets and she tries to save money any way she can.  From the preview tonight the scene is too funny – they decide to make signs for the lemonade stand and and her older daughter Lauryn asks ‘How do you spell lemonade?’  She also reveals her secret recipe for lemonade – one of her ingredients is 5 lbs of sugar.  June also makes the family favorite for dinner: sketti.

Tonight’s episode looks like it is going to be another crazy Thompson family episode and you won’t want to miss it, so be sure to tune in for our live coverage of  TLC’s “Here Comes Honey Boo Boo” at 10:00 PM EST! While you wait for our recap hit the comments and let us know what you think of the premiere season of Here Comes Honey Boo Boo, so far!

Tonight’s episode: June “Mama” is trying to keep the girls busy and decides to send the girls to the store which is 100 feet away from the house. Donta is the manager of the store and thinks Alana “Honey Boo Boo” is a ball of energy and mama even has to sometimes call and find out where she is after a whole hour.

Alana and Mike “Sugar Bear” are going on a date because he finds they are growing up really fast, Alana is really looking forward to it. First they head to a ball pit and Mike is happy that nobody else is there to nag them. Alana is having fun, she calls herself her daddy’s princess. Next the two go roller skating and they are so bad that Mike keeps falling on his butt, Alana as well. The best part of Mile’s day was seeing Alana smile and enjoy herself.

Anna “Chickadee” is in her third trimester and mama is giving everyone gross details about how the baby is born. Alana is tired of waiting, she wants the baby to come out already. Alana thinks birthing babies are disgusting, no kidding the way her mother explains it. Now the family is going to play a game, “guess the breath” where one person is blind folded and everyone else breaths in their face. Then the family switches it up, they have to kiss the person that is blind folded, even the dog takes a turn. (ok, now I just threw up in my mouth) Anna peed on the couch, June goes over and puts her hand on it and smells it, then declares for real, in case we didn’t believe Anna, that it is in fact pee on the couch.

Alana has an idea to have a lemonade stand to save money for pageant, they make a sign and it take all the women to figure out how to spell lemonade. Mama and Alana make the lemonade nice and sweet, then they are ready to sit outside and sell the lemonade. After many failed attempts at selling, Alana finally gets up and starts screaming her head off to attract people to stop and buy some lemonade. In a couple of hours, the family made twenty five dollars then Alana took off and went swimming.

Mama tries to cook every day, today they are having “sketti”. They put what looks like a cup of butter mixed with a cup of ketsup and microwave it, that’s the sauce. The spaghetti is done, Alana is the tester and she takes several strands and throws them at the wall, they stuck so it’s done.

Alana doesn’t think table manners are important, they don’t sit at the table, everyone just kind of does what they want. Sugar Bear thinks the spaghetti is the bomb and Alan is proud because she helped make it.