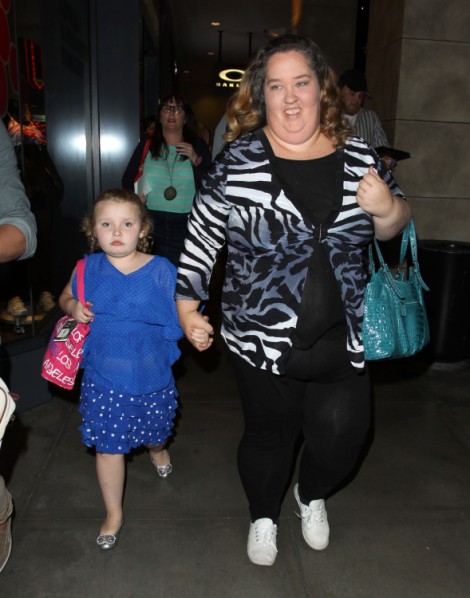 Here Comes Honey Boo Boo has taken the world by storm by introducing its own brand of dumpster shopping, road kill recipes and animal husbandry. But let’s add sexual tolerance into the mix too because Alana Thompson’s, aka Honey Boo Boo’s, Uncle Poodle (Lee Thompson) is talking about what it’s like being gay in the south and some stories are much more disgusting than combining ketchup and butter and calling it spaghetti.

It was announced Thompson was gay on the season finale of the show. And even if you don’t approve of Alana calling him Uncle Poodle, (because poodles are gay dogs in her estimation), it should warm your heart that Thompson doesn’t sweat the name and even calls out his family for giving him the strength to live openly in the deep south.

On a video to celebrate GLAAD’s Spirit Day Thompson said, “Being gay in the South … people don’t like it. Growing up as a kid, I was bullied day in and day out … broke ribs, dislocated jaw, cars vandalized … I’ve had cars vandalized to this day…. It is OK to be who you are … don’t let anybody change that.”

Super cool, no? And I could watch the video without subtitles which was a plus. So has your heart softened towards the first redneck family of television? I’ve said it before and I’ll say it again, I love me some Honey Boo Boo and Big Mama June Shannon. Yes, I can’t watch the show while I eat dinner because some things gross me out. Yes, their dietary habits are questionable and not to be applauded. And, yes, mud jumping is not how I like to beat the heat on a Saturday afternoon. But… I have washed my hair in a sink before (don’t judge! I was little!). I have sat bored on the couch eating cheesy puffs out of the container with my sisters during our summer vacation (they’re delicious!). And I’ve loved my family unconditionally. So I relate to some things.

Look, I’m not saying every Honey Boo Boo episode is PBS-worthy. But if you get past the flatulence, bad hygiene and rolls and rolls of toilet paper in the kitchen, you’ll find a family that actually enjoys and accepts each other, unequivocally  And it manages to do it without the Kardashian luxury vacations and perks. So believe me, I understand if these people are not your cup of tea but I appreciate their honesty and authenticity. Honey Boo Boo and June may not have Kim Kardashian’s money or charmed upbringing but at least they haven’t sold a sex tape yet. So, you know, they’ve got that going for them….

Do you appreciate the Uncle Poodle/victim video? Is there a heart in this show or is it just too gross?