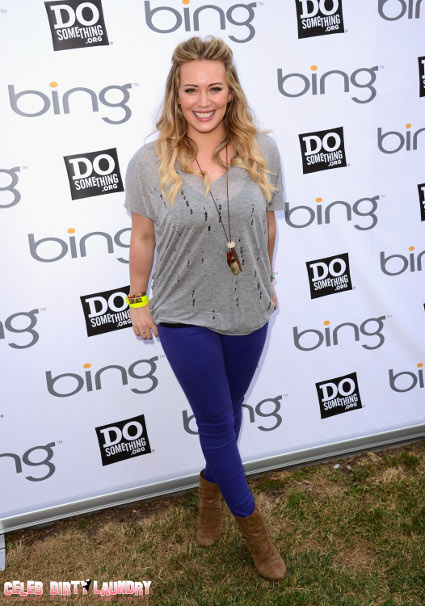 Hilary Duff, Cody Simpson, Teresa Palmer, and Rachel Leigh Cook were just a few of the hot and sexy celebs that turned up to help kick off DoSomething.org and Bing’s Summer of Doing with a beautiful day of volunteering and service at the Heart of Los Angeles (HOLA). Countless celebrities teamed up with eager volunteers, including representatives from Bing, to help repair the school’s rec rooms, paint new murals, help renovate bathrooms, and put some much-needed love into the garden areas.

Hilary Duff got down and dirty while helping improve the sustainable garden sections, all while chatting about the joys of new motherhood. She talked about everything from breastfeeding to getting back in shape to how wonderful it is to watch her son grow by the day. Also digging in the dirt was actress Rachel Leigh Cook, who currently stars in the new TNT series Perception. She said she loves volunteering and giving back to the community and is glad she could be a part of this year’s Summer of Doing.

Gosh, sounds like a full on party! Too bad our invitation got lost in the mail. We would have love to chat with Secret Circle‘s Phoebe Tonkin about WHY ON EARTH THE CW WOULD CANCEL ONE OF OUR FAVORITE FREAKIN’ TV SHOWS! Yeah, but we’re not bitter or anything. The CW left us completely hanging with the last episode of the Secret Circle . . . and then they decided to cancel it.

At the end of the day, HOLA students were given a surprise performance by Cody Simpson, who later helped finish one of the murals inside one of the park buildings.

It’s always refreshing to see celebrities out there doing some good in the world. Way to go, Hollywood! Check out a few photos from the event below!

Caption: Bing and DoSomething.org Kick Off the Bing Summer of Doing at HOLA.

Image Credits to: WireImage for Bing and the Bing Summer of Doing.