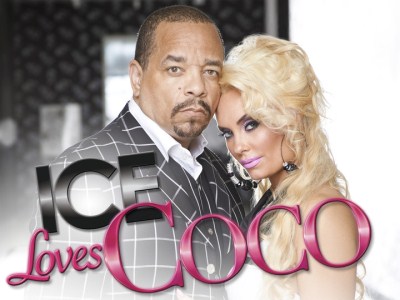 Tonight is the fifth episode of the second season of Ice Loves Coco and its called ‘Baby Got Separation Anxiety.’  Since rapper-turned-actor Ice-T exchanged vows with voluptuous swimsuit model Coco in 2001, the two have been inseparable. Now this infamous Hollywood couple is in their second season of opening up their home for the world to see as they focus on starting a family and exploring new business ventures both together and apart.

Stay tuned as we live blog the show tonight with all the up-to-the-minute details.  On the last episode of Ice & Coco, ever since Coco has been diagnosed with high blood pressure, she knows that she needs to get healthy and lower her stress and to help with that, she is kickboxing, which she really seems to enjoy. Ice struggles to join Coco on her new diet, not wanting to give up his Twinkies and cereal after midnight. Meanwhile, Coco decides to teach Soulgee how to drive. If you missed the episode you can read our full official recap HERE.

On this week’s episode Ice and Coco are apart for more than 24 hours for the first time in their relationship when Ice performs at a concert in Atlantic City and Coco helps with a fashion show in Arizona. These two are so cute and so happy in love, no wonder they are having separation anxiety.

The episode looks great, so don’t forget to to stop by we will be live blogging the show with all the up-to-the-minute details at 10:30 PM EST so make sure to come back to this spot and watch the show with us.

RECAP: Soulgee tells Coco that he wants to get a car, she tells him that he needs a good credit score to get one. After they both check online together, Soulgee tells her that it’s not good, he might be having to get one of those cars where he rolls up the windows himself.

Ice and his friend Mickey meet up with Coco and Soulgee, Ice tells her that he has to perform in Atlantic City in two weeks.

Coco is talking to his sister Kristy online, she tells her that she has a fashion show in Arizona for her new tutu line and wants Coco to be there, it’s at the same time that Ice is going to Atlantic City.

Ice and Coco have an unspoken rule, no matter how crazy life gets they try not to spend more than 24 hour apart.

The next day, Coco tells Soulgee that she wants to go to her sister’s fashion show and wants his help.

It’s the day that Coco is leaving for Arizona, she leaves Ice a list of what he has to do when she is away. Coco arrives safely at Kristy’s house, she is so happy that she is there to help her sister. Coco has so many plans and her sister thinks that it is maybe too much. Coco disagrees, she thinks her sister has to take a risk to get a return.

Ice is lost without Coco, he doesn’t even know how to contact the car service. He feels like a part of him is missing, eleven years without being 24 hours apart, this is hurting him. Ice is with Mickey again, he is rehearsing his rap and can’t focus. Mickey has confidence in Ice that he won’t mess up.

Coco is at the dance studio, Kristy thinks Coco’s expectations are too high for two year olds. Coco tries to get the group in order, with Spartacus’s help, but it’s not working that well. Kristy is a little upset that Coco is taking over the show.

Coco is talking to Ice on Skype, he tells her that when you take a man’s dog you really hit low. Coco goes on to tell Ice that the dance studio was chaos, he tells her that he really misses her and can’t wait to see her. The two share a 3D hug over Skype, it is really clear that these two just love each other so much.

Coco is at the studio with Kristy, she is making sure that the sets are in order. Kristy tells Coco that she is stressing her and Coco is surprised that her sister thinks the stress is actually her.

Minutes before the fashion show, Coco realizes that it’s not about smoke machines, it’s about her sister’s show. The show is a success and Coco is so happy that her sister had her time to shine.

Meanwhile, Ice is at Harrah’s in Atlantic City, he is getting ready to do the show but the only thing on his mind is when Coco is going to be there, just as she walks in with Spartacus.

It’s a full house, it’s time for Ice T to do what he does and when he feels the love from his fans, it all feels good. Once Coco got there, everything went well.

Back at home, Coco and Ice are snuggling in bed with Spartacus. That’s it for tonight, next week Coco takes a small part in Law & Order, don’t forget to come back for our live recap.