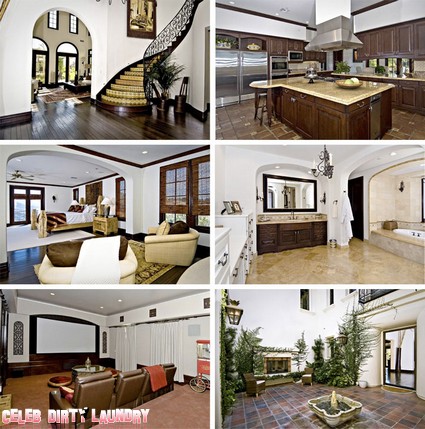 Wow – look what you can buy if you film a few videos, get your Mom to put them on YouTube and hook up with a former Disney star. Justin Bieber has just forked out $6 million for this Calabasas mansion outside Los Angeles. He’ll move in by the end of June.

The 18 year old has been trying to seal the deal on this property for a while but according to TMZ it’s now officially all his. So he can have sleepovers and pool parties anytime he wants with girlfriend Selena Gomez. Not bad for a tween whose fifteen minutes of fame should have been up sometime in 2011 by my calculations.

Residents might not be happy about the teen heartthrob moving into the area but the Mayor is excited ‘Justin is welcomed to Calabasas and his privacy will be respected just like everyone else.’ Privacy should be something the Biebs has plenty of in this neck of the woods. He’s 22 miles outside Hollywood and the paparazzi hot spots like Rodeo Drive and the Sunset Strip. This Spanish style mansion is located in a gated community. There are actually two security gates to keep prying eyes out and Justin and Selena in!

Justin definitely got a bargain on his new digs. The asking price was $7.5 million. It’s all his for just over $6 million. So what have the Beliebers helped their boy buy? The house is situated on a 1.28 acre property and has six bedrooms, seven bathrooms, six fireplaces, two separate garages, an elevator, a pool and a spa.