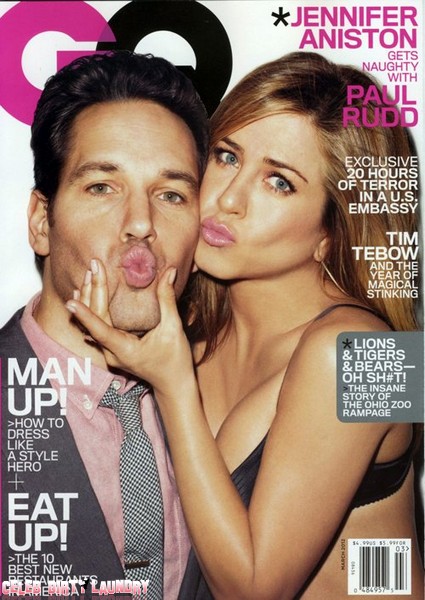 Jennifer Aniston and Paul Rudd are gearing up for the premiere of their new film, Wanderlust. But if you can recall this is not their first film together. Over a decade ago the two starred in the film The Object Of My Affection, and they sat down for the cover of GQ magazine and discussed their long-standing relationship.

Jen 43, and Paul, 42 first met each other when they were in their early 20’s, and have remained friends ever since. When asked by the mag if it was awkward when having to kiss each other, Jen brushed it off by saying, “Nah, we’ve kissed for years”, while Paul said, “Yeah, we’ve made out for decades”. So they’re old pros at it, no big deal. That explains the great chemistry between them.

Jen also addressed the pregnancy rumours that have been rippling through the magazines for the last few months. She said:  “I’m not having triplets. Not having twins. Nor am I having one baby. I did not elope… You heard it here. I’m not knocked up now.”

When asked to discuss their views on relationships, Paul said that “most marriages, mine included, you’re constantly tending the garden, constantly working at it.”

Jennifer revealed:  “It’s a growing, literally living thing. There’s going to be growing pains, there’s going to be awkward moments—your lanky phase, your pimpled phase. But if the road starts to [diverge] and one person is growing this way and the other is growing that way… Sometimes that can happen and you can stay together, and sometimes you can’t.”

You can say that again Jen. You can catch Wanderlust (where she also met boyfriend Justin Theroux) in theatres February 24th. As for the GQ issue, famed photographer Terry Richardson captured the two’s antics from behind the lens perfectly – and the two are looking pretty hot and sexy. The issue hits stands February 21st.