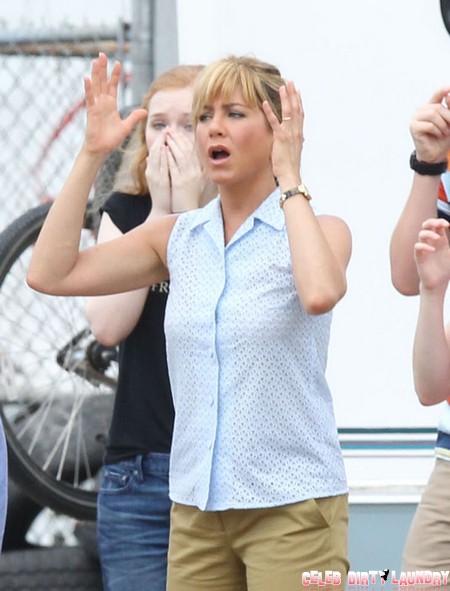 It’s been years since Brad Pitt and Jennifer Aniston broke up and Brad sauntered into the arms of Angelina Jolie.  The feud between the two actresses has continued on for years, not surprisingly, since Angelina and Brad slept together while he was still married to Jen.

Jen, 43, and Angie, 37, have yet to make amends – but are they finally ready to bury the hatch?  According to Us Weekly, Jen no longer has any beef with Angie and is happy in love with her current beau Justin Theroux.  Sure she is…

Jen recently filmed an upcoming viral video ad for Smartwater to be released this fall, and she pokes fun at the constant rumors that she is pregnant and engaged.  It was reported that she also wanted to include Angie in the shoot to further poke fun at the years of media speculation surrounding their feud.

Aniston’s rep however has admitted that this was never the case. Dang – that would be hilarious!  That’s if Angie would ever consider it, which I highly doubt it.  So do you think the two ladies have or will ever sit down for a one-on-one pow pow?  Angie strikes me as someone who can care less, and Jen for her part appears to have moved on since her 2005 marriage.

What do you think?  I say what would really be amazing if the two ladies did a movie together.  And why not just throw Brad in it just to stir up the pot!