Jennifer Aniston is no Friend of Matthew Perry — Gives him the Cold Shoulder! 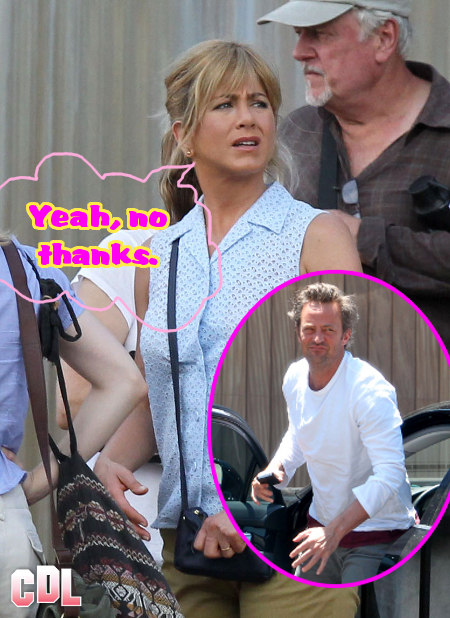 Matthew Perry has finally returned to our televisions via NBC’s new show Go On and he is in desperate need of a hit. The former Friends’ star has had a rough time choosing good projects since his time as Chandler Bing ended almost ten years ago. The actor has reached out to former cast mates hoping that they would do a guest stint or at the very least a cameo on his new show. Jennifer Aniston was at the top of his list and according to the National Enquirer, she had no problem stringing him along before finally declining his invite.

“Jen gave Matt the complete brush-off when he came calling for help,” said a source for the National Enquirer. “He’s desperate to get his career back on track, and of all his old co-stars, Matt knew Jen is in the best position to help because she’s had the most success. He even told network brass he’d have no problem convincing her to at least do a cameo. But now that she’s blowing him off, Matt feels like a fool. Matt kept on asking if Jen would commit to a guest stint on an episode or two, and for weeks she wouldn’t give him a concrete answer.”

When Matthew finally asked Jennifer for a pronto answer, she replied and said that she was “just too busy.” Courtney Cox, fearing that a guest stint would interfere with her work on Cougar Town, also turned down his invitation. Do you think that Jen ever intended to help her friend out or did her schedule really get in the way of appearing on Matthew’s new show? Did she handle the situation properly or do you think that Matthew has every reason to be upset with his former castmate? Tell us your thoughts in the comments section below!