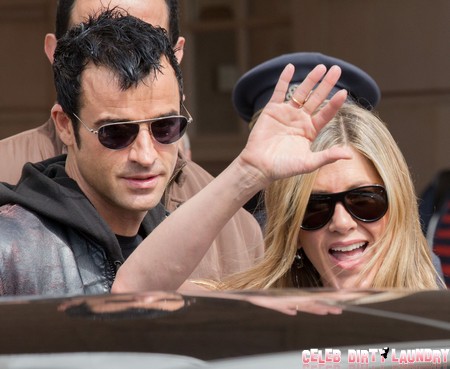 Jennifer Aniston is best know for playing Rachel Greene on the hit show Friends. For those of you who haven’t seen every episode 17 times, Rachel is the daughter of a very rich doctor. She is often spoiled, unfamiliar with the menial, daily chores of the peasantry—as she was raised with a full household staff.

Well, I’m starting to think that Jennifer wasn’t so much acting the part as being exactly who she is at heart, plus script. Jennifer recently got engaged to Justin Theroux, writer and actor. The pair have had an international romance, photographed in New York, Paris, London—basically they went anywhere boyfriend jeans, a leather jacket, and chunky scarf is acceptable.

The couple got engaged last month, and a friend reported to the National Enquirer Print Edition, September 17th, that Jennifer has mandated some plastic surgery for her future hubby! “Jennifer Aniston nearly sparked World War III when she suggested that her fiancé Justin Theroux get a nose job to pretty himself up for their wedding day.”

The insider reported, “Justin is by no means the vain type, but he’s aware that his nose is larger and longer than it was in his 20s, and Jen definitely touched a nerve.”

Remember on Friends, when we see Rachel’s huge nose that was slimmed down after surgery for a “deviated septum”? Well, Justin is due for the same fate! Jennifer is no stranger to cosmetic surgery. She has reportedly had two nose jobs (and, guess what, she cited a deviated septum as the cause!), breast implants, botox, lip fillers, and probably tons more that we can’t even guess! I imagine that you reach a point where there’s no going back (think Taylor Armstrong from Real Housewives of Beverly Hills!).

No word yet on if Jennifer’s crazy demands will diminish Justin’s passion, but I’ve gotta say—telling a man he needs to get reconstructive facial surgery before your wedding pictures are taken is a pretty easy way to lose him!