Jennifer Aniston Still Denying Her Age And Crying About No Baby 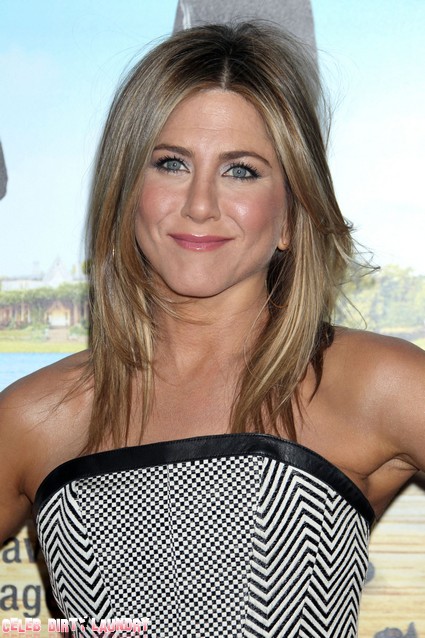 Jennifer Aniston has proven once again that she is the phoniest of the Hollywood phonies by pretending that she doesn’t care about being childless in her fifth decade. Jennifer added that she feels like a 30 year-old proving that she is still totally into denial about her age. At least if Jennifer could admit that she desperately wants to have a child then we could feel something other than disgust with her. But no, she goes on acting as if she is okay about losing Brad Pitt to Angelina Jolie and seeing them with a huge happy family – she even sent Angelina flowers in her pathetic attempt to show that she is above petty bitterness.

Jennifer Aniston says that she “doesn’t give a crap” that people think she’s unhappy because she hasn’t had a baby. The 43-year-old actress – who is dating actor Justin Theroux – revealed she is happier than she’s “ever been” and hit out at “very narrow-minded” people who just assume the opposite due to her lack of kids.

Jennifer said to ‘CBS This Morning’:  “That doesn’t measure the level of my happiness or my success in my life, in my achievements, in any of that.”

Despite being three years into her 40s, Jennifer – who was recently reported to have said she wants to get married by the end of the year – admits she “feels great” and still gets “excited” every time she has a birthday.

She added: “I feel like I’m 30. I honestly didn’t start to feel my best until was in my 30s. Physically, I started eating better and taking better care of my body, in terms of being physical and exercise.  I think it’s important every year to celebrate your birthday and be excited about it. I’m 43 and it’s great!”

What do they say – what’s the expression? Jennifer, are you protesting just a little bit too strongly? Show me what a person spends time denying and I’ll show what matters to them. Jennifer Aniston remains a huge celeb with a string of popular, if not critical, successes under belt – but she can’t get out from under the shadow of Angelina Jolie. What do you think about all this? Let us know in the comments below. Is Jennifer telling the truth when she says that she does not care about being childless? And what about her AGE ISSUES? Come on – she feels like she is 30??? Give me a break.